1428 dolphins killed in an illegal hunt 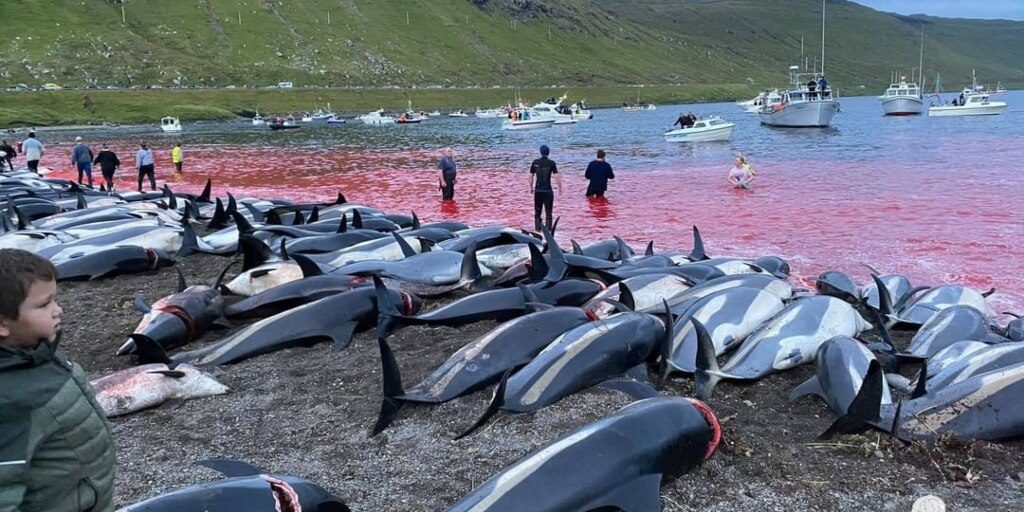 The scale of the hunt is being described as possibly the largest single hunt of cetaceans ever recorded worldwide.

On 12 September, a super-pod of 1428 Atlantic white-sided dolphins were ambushed and slaughtered as part of an illegal hunt, international marine conservation organization Sea Shepherd reported.

According to the non-profit, the scale of the hunt is possibly the largest single hunt of cetaceans ever recorded worldwide.

Local whalers in the Faroe Islands herded the pod into shallow waters at Skalabotnur beach in Eysturoy, where they were killed with knives. Around 500 hunters and 50 boats signed up to be a part of the hunt.

Hunting for sea mammals in the Faroe Islands — an autonomous territory of Denmark located between Norway, Scotland and Iceland — is an ancient custom that dates back to Viking times.

Known as a Grindadráp, or just “the grind,” the controversial practice involves cornering pilot whales, the second largest species of dolphins following the orcas, and other dolphins into fjords before being stabbed to death.

According to officials, the hunting practice is fully regulated and helps to sustain communities through locally sourced means.

Over the past two decades, around 600 pilot whales and 250 white-sided dolphins have been caught each year on an average. However, with the scale of the slaughter that took place on Sunday even those who support the practice expressed concern over this year’s event.

Olavur Sjurdarberg, the chairman of the Faroese Whalers Association, told the BBC: “It was a big mistake.”

“When the pod was found, they estimated it to be only 200 dolphins.”

He added that  only when the killing process started did they find out the true size of the pod.

“Somebody should have known better,” Sjurdarberg said. “Most people are in shock about what happened.”

Graphic images of the bloody, lacerated corpses left lined up on the beach  has sparked a huge outcry from animal activists and the public alike.

The Sea Shepherd Conservation Society described the killings as a “massacre”.

The group reported: “We have seen dolphins slashed to pieces by boat propellers.

“We have seen dolphins struggling and fighting while the whalers were cutting through their bodies.

“There simply are no words to describe [the] horror.”

Captain Alex Cornelissen, Sea Shepherd Global CEO, added : “Considering the times we are in, with a global pandemic and the world coming to a halt, it’s absolutely appalling to see an attack on nature of this scale in the Faroe Islands,”

“If we have learned anything from this pandemic is that we have to live in harmony with nature instead of wiping it out.”

Condemning the incident, Barbara J. King, an anthropologist and emerita professor of anthropology at the College of William and Mary, said : “This atrocity requires our voices raised in protest.

“This isn’t local custom and it’s not a mere ‘error’ of scale. The devastation to dolphin families is and will be immense.”

Prime Minister Bárður á Steig Nielsen in response to the  aftermath and the widespread outrage said: “We take this matter very seriously. Although these hunts are considered sustainable, we will be looking closely at the dolphin hunts, and what part they should play in Faroese society.

“The government has decided to start an evaluation of the regulations on the catching of Atlantic white-sided dolphins.”

Share this story: 1428 dolphins killed in an illegal hunt