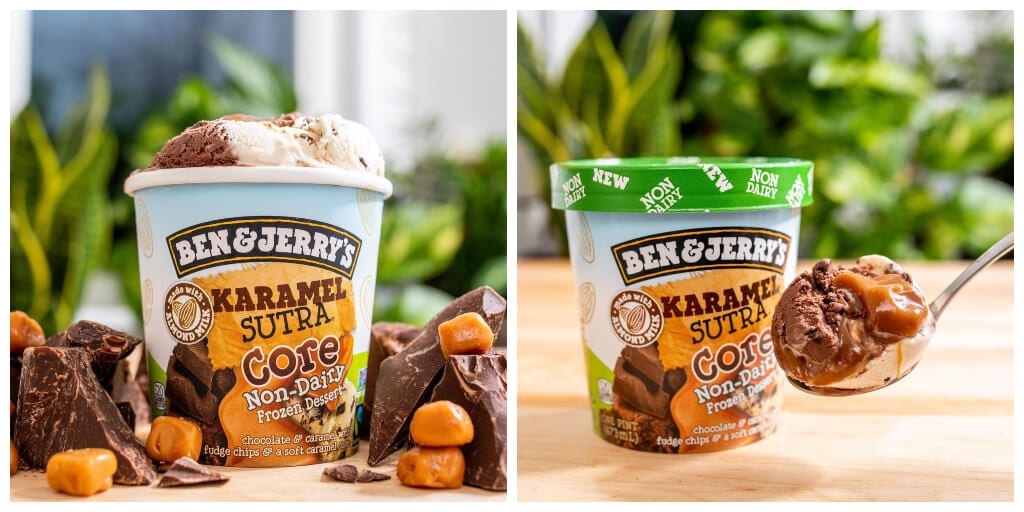 The new dairy-free version has a gooey vegan caramel core surrounded by chocolate and caramel ice cream made from almond milk and fudge chips sprinkled all over.

Ben & Jerry’s has expanded its line of vegan ice creams with the launch of the new non-dairy Karamel Sutra Core in the US.

The newest option is made from an almond milk base split into chocolate ice cream on one side and caramel ice cream other along with fudge chips sprinkled all over and a soft gooey caramel ‘core’.

‘Have you met this indulgent flavor’

“This indulgent flavor is now also available as a certified #vegan pint!”

While the Karamel Sutra flavor is the brand’s first non-dairy addition to its Core line, it is made from almond milk like many of the other ice creams in the range.

The same innovative base was also used to create the Colin Kaepernick inspired new Change the Whirled flavor.

‘Just as yummy as our dairy’

Speaking about the growing vegan lineup, Matthew McCarthy, CEO of Ben & Jerry’s told Yahoo Finance: “As a company that has a cow on the package, we’ve been associated with our Vermont farmers for decades now.

“But our fans want all kinds of different ways to get Ben and Jerry’s euphoric flavors. And that includes dairy but also includes vegan or non-dairy flavors, which we started, really, developing a few years ago.

“And the more we release, the more fans said, hey, for whatever reason, dietary restrictions, choices, awareness about the carbon footprint of the food choices our fans make, they just kept asking for more flavors.

“So, our flavor gurus just got after developing more and more of our classic flavors…

“And to launch that into a vegan, it takes a lot of work, actually, to do that and to be just as yummy as our dairy.

“But it’s about wowing our fans. We want to excite our fans and keep them really excited about the stuff that we do to keep our fans happy.”

The new non-dairy Karamel Sutra flavor is available in stores now at a retail price between $4.39 and $5.99 per pint.