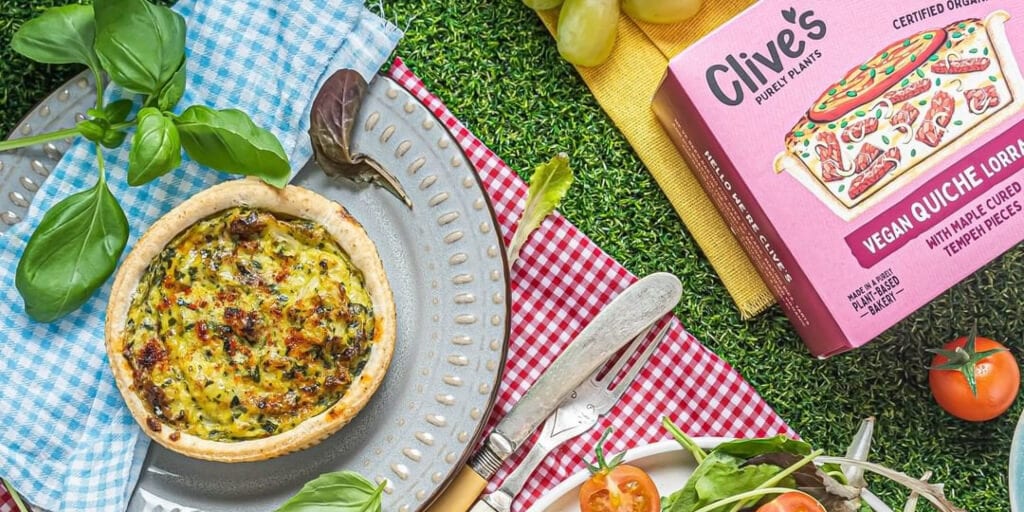 “Clive’s have been at the forefront of plant-based innovation for 30 years and we are delighted to be leading the way once again with these vegan quiches.”

Described as the world’s first, the quiche is made from okara – the whey from making soya blend- to give the quiche a “perfect eggy texture”.

In addition, Clive’s has rolled out a Creamy Cauliflower Quiche, which is made using a creamy blend of cauliflower, kale, garlic, and turmeric.

“Clive’s have been at the forefront of plant-based innovation for 30 years and we are delighted to be leading the way once again with these vegan quiches,” Esther Pearson, Managing Director at Clive’s Pies said.

“As a family following a 100% vegan diet we were still seeking that comforting indulgent creaminess in our food, which we created in the Creamy Cauliflower Quiche.

“The bacon replacement we use in the vegan Quiche Lorraine is tempeh, made locally in Somerset, which we marinated with smoked paprika and maple syrup.”

She added: “Our clever Clive’s team have perfected the recipes and we are very proud of the results.

Waitrose buyer for vegetarian and vegan, Charlotte McCarthy, told Vegan Food and Living: “We are always looking for new and exciting dishes to add to our vegan range and we’re delighted to be the first supermarket to launch these delicious plant-based products from Clive’s.

Both the plant-based quiches have an introductory price of £2/165g and roll out in Waitrose tomorrow and in independent retailers across the country.