Hershey to launch its first vegan chocolate this year 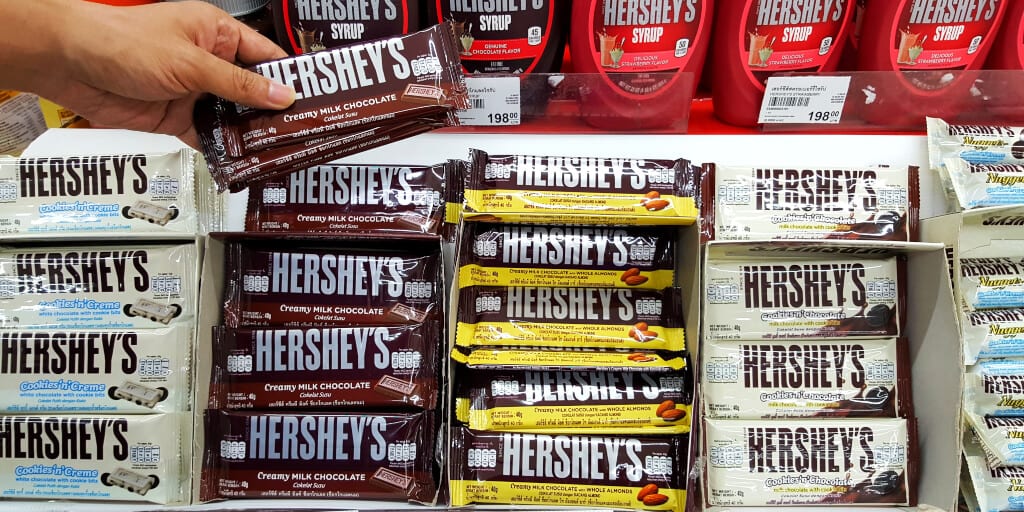 The Hershey Company has announced plans to expand its “Better For You” chocolate category with the launch of its plant-based chocolates later this year.

Hershey, which currently has more than 80 world-famous brands including stalwarts Reese’s, Kit Kat, Jolly Rancher, SkinnyPop, and Pirate’s Booty, is following in the footsteps of many dairy chocolate brands that have recently launched vegan alternatives.

Hersehy’s ‘Better-for-you’ category previously worked on portion-controlled choices and now it plans to include reduced sugar, organic and plant-based alternatives.

The new dairy-free products in the pipeline include – Hershey’s, Hershey’s Special Dark, Reese’s, and Reese’s Dark.

According to Hershey President Chuck Raup, the company is “setting the foundation for long-term sustainable growth in the better-for-you category.”

“Everything we do is led by our consumers and our commitment to deliver only the most delicious snacks,” Raup said.

“We’re driven to provide more choices to ensure they enjoy our brands and products in ways that are right for them.”

The company has also partnered with leading sweetener company, ASR Group, “to co-lead an equity investment in Bonumose, Inc., a start-up company with breakthrough innovations in plant-based food ingredients, including rare and natural sugars.”

The investment will “enable a research and development partnership to advance the tastes of not only zero- and reduced-sugar chocolate, but also Hershey’s broader [better for you] snack offerings going forward.”

Hershey’s chief growth officer, Kristen Riggs said: “We are the leader in US confection. And, our consumers rely on us to understand their needs for everyday moments, seasons, and special occasions, offering high-quality and great tasting candy that’s accessible for everyone.

“Expanding our expertise, building new capabilities, and delivering more choices in better-for-you confection is the next big category opportunity for us to lead.”

According to a recent market report, the vegan chocolate market has an expected compound annual growth rate (CAGR) of 12% from 2020 to 2027, while the traditional chocolate market, has a predicted 4.6% CAGR in the same timeframe.

Earlier this month, Nestlé’ announced that an all-vegan KitKat bar called KitKat V will hit store shelves later this year in the UK.

Cadbury is also reportedly developing a vegan version of its Dairy Milk bar.  The bar is currently undergoing trials as companies hustle to keep up to pace with the demand for dairy-free food products.

Other companies, such as Lindt, Divine, and Endangered Species Chocolate, have also released their versions of sustainable plant-based chocolates.

Share this story to let others know about Hershey’s plans to launch plant-based chocolates in its “Better For You” category.