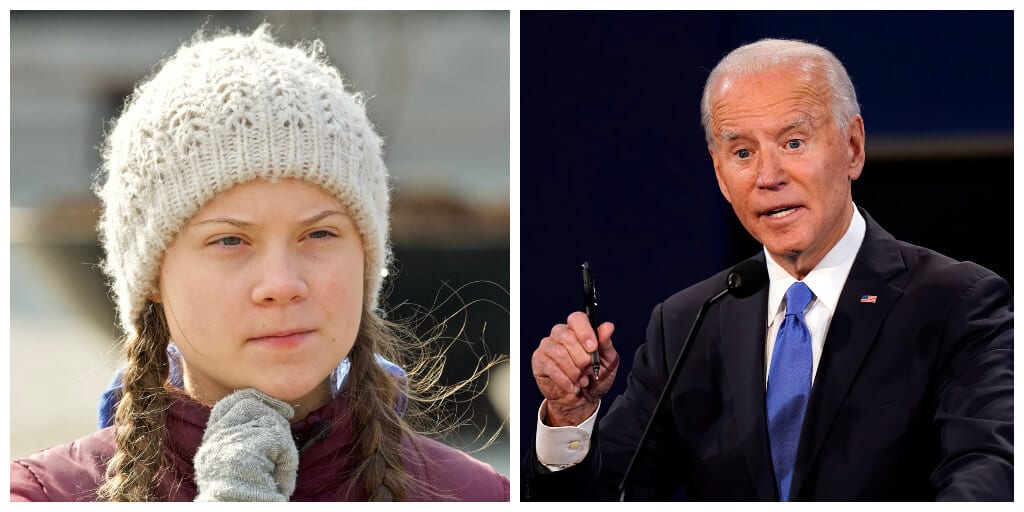 “They are just treating the climate crisis​ ​as it was a political topic, among other topics and, yeah, treat it as a crisis, that’s the No. 1 step​“

Greta Thunberg has slammed US President Joe Biden for making the climate crisis a mere political issue and “not doing enough” on the matter.

The climate leader made the comments in an interview with MSNBC’s Mehdi Hasan.

‘Not nearly enough in line with the science’

When Hasan asked Thunberg to grade Biden on how his administration is handling climate change, the 18-year-old, who endorsed Biden during his campaign said: “​Well, you shouldn’t take that from me, I’m just a teenager, so I’m not — I don’t have the mandate to sort of give grades like that.

“My opinions on this doesn’t matter.

“That’s not me saying, that’s just black and white, looking at the facts​.”

Since joining the office, Biden has signed a slew of executive orders meant to target pollution, sustainability, and the accelerating global climate.

He not only rejoined the Paris treaty but has also appointed John Kerry as climate tsar and revoked the controversial Keystone XL oil pipeline.

“Today’s actions advance those goals and ensure that we are tapping into the talent, grit, and innovation of American workers, revitalizing the U.S. energy sector, conserving our natural resources and leveraging them to help drive our nation toward a clean energy future, creating well-paying jobs with the opportunity to join a union, and delivering justice for communities who have been subjected to environmental harm,” a statement from the White House read at the time.

‘Climate crisis​ ​is not a political topic’

Despite the apparent efforts, Thunberg seems far from impressed.

She told Hasan: “I would just like you [Biden] to basically just treat the climate crisis like a crisis.

“They have said themselves that this is an existential threat and they better treat it accordingly – which they are not.

“They are just treating the climate crisis​ ​as it was a political topic, among other topics and, yeah, treat it as a crisis, that’s the No. 1 step​.”

She stressed the need to create more awareness around the severity and impact of climate change and urged the US president ‘to tell the situation as it is’.

According to the 18-year-old Swede, showing the climate crisis as a crisis would help create voter and policy support, as well put pressure on the elected leaders.

“Because if people are not aware of the crisis that we face, of course they wouldn’t put pressure on the elected leaders,” Thunberg said.

“[And] how can you expect support and pressure from voters if you are not treating the crisis like a crisis. Since the climate crisis doesn’t exist, how can we expect people to want climate action.”

The petition has so far garnered 152,519 signatures. You can read and sign the petition here.