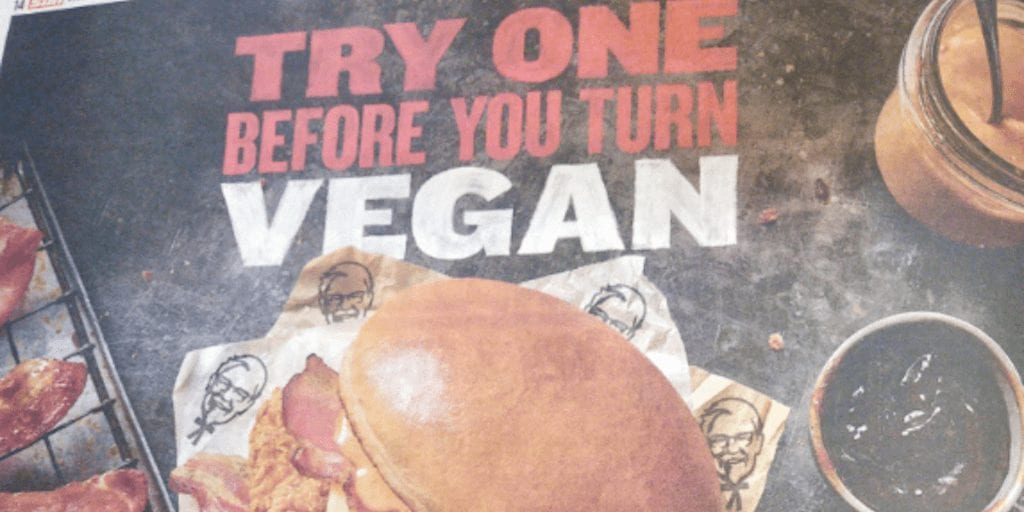 KFC has admitted that sales of meat products are under threat due to the rise in veganism in a strange ad campaign which has been described as ‘unethical’.

The promotion pictures a meaty burger and urges customers to ‘try before you turn vegan’.

An accompanying message explains: “Let’s be frank – we’ve timed this burger badly. It’s coming out during a time when unprecedented numbers of people are eschewing meat, and embracing aubergine,” says the advert.

“There’s every chance that you yourself, if not already vegan, are seriously considering it.

“It might be the worst possible point in history to launch this burger. But bad timing never tasted so good.”

‘Year of the vegan’

KFC has admitted that 2019 is the ‘year of the vegan’ but has turned the movement on its head with messages such as ‘a vegan sausage roll it ain’t’.

Some vegans were unimpressed with the adverts, and condemned KFC on social media.

Despite its seemingly anti-vegan advertising, KFC is currently in the process of developing a vegan chicken burger.

Earlier this year’s the company’s Innovation Director, Jack Hinchcliffe, told The Telegraph: “Veganism as a trend has really blown up. We’re currently in the process of working on both vegetarian and vegan options in the innovation kitchen here in our head office.

“For us it’s about taking the amazing tastes of KFC and offering those in a vegetarian or vegan alternative.”

What do you think of KFC’s ad campaign? Tell us in the comments section below!