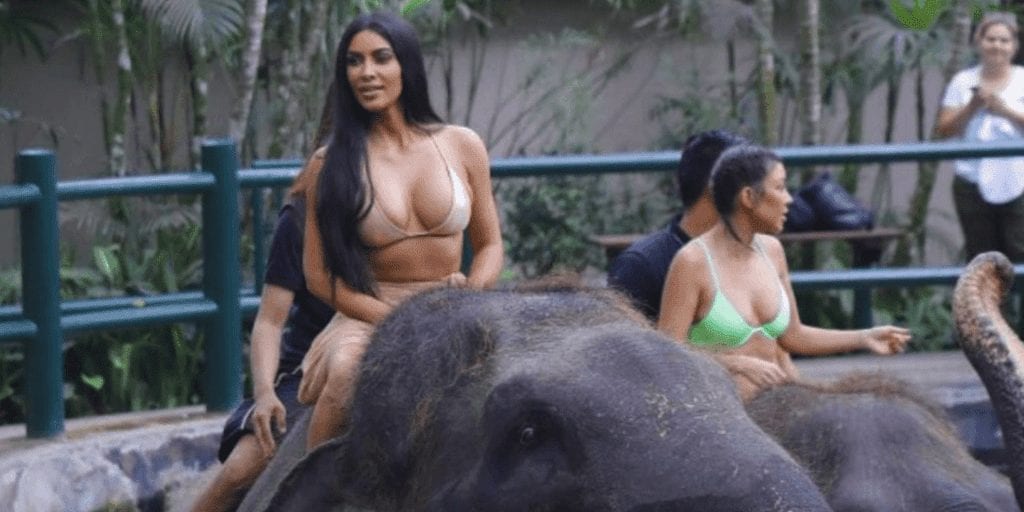 This is not the first time Kardashian has visited a so-called sanctuary. Image: Damian Aspinall on Instagram

Kim Kardashian has been accused of animal cruelty after posting pictures of herself at a so-called elephant sanctuary in Bali.

One image shows the reality TV star touching an elephant, which has a man sitting on top of it, and another image shows an elephant wrapping its trunk around her body.

“Missing Bali! and the amazing elephant sanctuary,” she captioned the posts.

Animal rights activists and social media users reacted with fury to the images. The post has more than 37,000 comments, many of which condemn the visit.

One of the top comments, which has 11,000 likes, reads: “Do better research next time, don’t go to fake sanctuaries that chain up elephants and torture/beat them into submission.”

The post has endless angry comments, claiming the star to be ‘cruel’ and ‘ignorant’ to the reality of so-called elephant sanctuaries.

Kardashian announced just last week that she was going plant-based while at home.

And she defended the trip in response to the backlash on Twitter: “We visited an elephant sanctuary that has rescued these elephants from Sumatra where they would have otherwise gone extinct,” she wrote.

“It is an organisation that is working to save these beautiful animals. We did full research before going.”

But animal rights activists were not impressed.

Wildlife activist Damian Aspinall said: “People such as @kimkardashian have VAST audiences and really should be using that reach to educate rather than popularising abuse such as this!”

A spokesperson for PETA explained the issues involved with elephant tourism. Deputy director of the animal welfare’s branch in the US, Rachel Matthews, said: “All over the world, tourist traps offer the chance to climb up on an elephant’s back without divulging what these animals endure.

“Baby elephants have their spirits broken through an egregiously cruel process in which still-nursing elephants are dragged from their mothers, immobilised, and gouged with bull hooks and nails.

“These horrific, ritualized training sessions often leave elephants severely injured and traumatized, and some do not survive. Riding elephants or visiting camps that force elephants to come into contact with humans directly supports these abuses.”

What do you think of Kardashian’s visit to an elephant sanctuary? Tell us in the comments below!