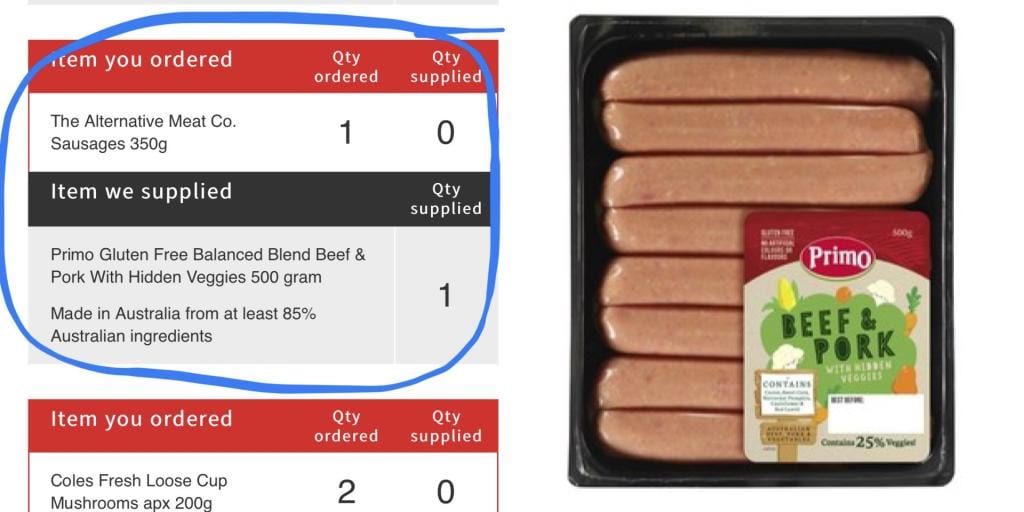 An online vegan shopper was furious when her online delivery arrived after discovering the supermarket had replaced her plant-based sausages with a meat version.

Coles customer Gabi Jo from Sydney, Australia was disgusted to be given the beef and pork Primo sausages in place of the Alternative Meat Company sausages she had ordered.

Jo had ticked the ‘out of stock’ option, which gives the supermarket the go-ahead to replace the sausages with a similar product if they had none of her preferred vegan sausages left.

She received a notification from Coles in advance explaining her order had been switched out for a meat version. And Jo told Yahoo News she “gifted the sausages straight to [her] delivery driver as [her] house was meat-free and didn’t want to bring them inside”.

“Firstly, I might not be vegetarian. I might be, for cultural reasons, not able to eat pork and they’ve chosen pork out of all options?

“It’s really frustrating because by the time [the delivery] got here I was so angry because I had been excited to cook them for dinner.”

She immediately made a complaint to Coles, and said the operator was similarly bemused by the choice of replacement.

“They looked disgusting,” she continued.

“There was nothing [on the packaging to suggest] they were anything but pork and beef. Whereas mine, the Alternative Meat Co., were 100 per cent plant-based, 100 percent vegan.”

This isn’t the first time Coles has replaced a vegan option with animal meat, after another customer had a similar experience earlier this year.

A Coles spokesperson said in a statement: “We are proud of our expanding range of alternative meat products.

“In this instance, a suitable alternative was not provided, and we have apologised to the customer and offered her a full refund.

“We are reviewing the processes we have in place for online orders to ensure this does not occur again.”

What do you think of the mistake made by Coles? Share your thoughts in the comments below!