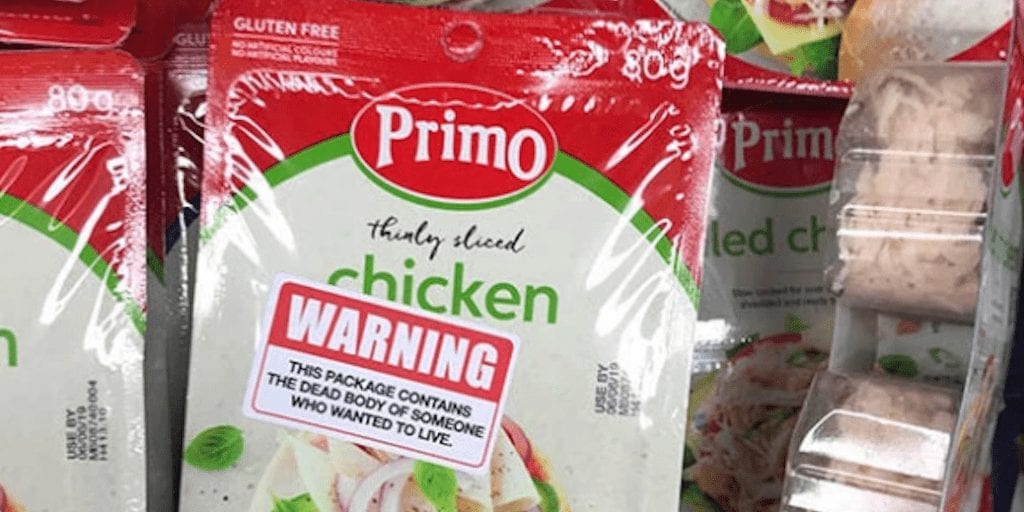 Vegan activists are facing a backlash for ‘meat shaming’ after they tagged animal products with vegan stickers at an Australian supermarket.

Labels reading ‘Warning: ‘this packet contains the dead body of someone who wanted to live’ were placed on packets of thinly sliced chicken and other meat and dairy products at a Woolworths in St Helena, near Melbourne.

One typical argument used against veganism is the notion that it’s ‘personal choice’ to eat meat, but the stickers aim to disrupt that idea and focus on the animal’s desire not to die.

Unfortunately the concept was lost on many meat eaters, who condemned the stickers on social media.

One Facebook user said that ‘vegans are getting to a point where they are just as bad as extremist religious folk’.

Others suggested fines should be introduced to deter activists from using the stickers.

But some social media users defended the activists’ actions.

The stickers are on sale on Etsy along with other similar messages, with 300 vegan stickers costing £27.

The Activist Stickers also urge shoppers to ‘Ditch Dairy’, while another label displays a chicken and asks: “Would you kill her yourself? If not, why are you paying someone else to do it?”

Another sticker reads: “If you’re against animal cruelty, why are you buying it?”

One asks: “Isn’t it time you stopped drinking breast milk?”

What do you think of the vegan stickers? Tell us in the comments section below!