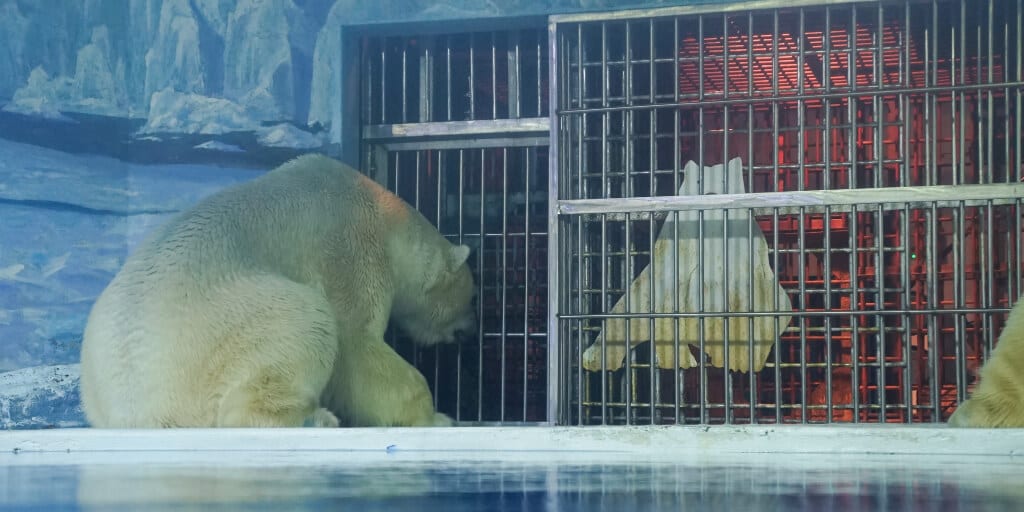 “Polar bears belong in the Arctic, not in zoos or glass boxes in aquariums” and certainly not in hotels.”

China’s first “polar bear hotel” in northeastern Heilongjiang has been slammed by animal activists for ‘profiting from misery’.

The Polar Bear Hotel, which is touted to be the first-of-its-kind in the world is part of the Harbin Polarland theme park in Heilongjiang’s capital and largest city, Harbin

The $19 million hotel has been built around a polar bear enclosure to allow guests round-the-clock polar bear viewing from their bedrooms.

According to reports, the hotel has constructed a barricade between the animals and the guests using a total of 33 pieces of tempered glass spread across all functional areas of the premise.

Photos from the hotel show that the arctic animals – endangered since 2008 – are housed in a pen made of harsh lightings, a white painted floor, and fake rocks and icicles.

Yang Liu, a Harbin Polarland spokesperson, told Reuters that the indoor coop is only part of the animals’ total enclosure area. They are allowed to roam outdoors when temperature and air quality permit.

She added that the extraordinary experience of having polar bears as “neighbours 24 hours a day” has already piqued interest and the hotel is already booked right through the trial period.

‘Built on the suffering of intelligent, social beings’

Animal activists have slammed the hotel for subjecting polar bears to cruelty for commercial gains and are urging people to stay away from this animal prison.

“Polar bears belong in the Arctic, not in zoos or glass boxes in aquariums” and certainly not in hotels,” Jason Baker, senior vice president at animal rights group PETA told Reuters.

“Polar bears are active for up to 18 hours a day in nature, roaming home ranges that can span thousands of miles, where they enjoy a real life.”

He added:“The greedy, exploitative aquarium industry, which is out of place in today’s increasingly aware world, is built on the suffering of intelligent, social beings who are denied everything that’s natural and important to them.

“PETA urges patrons to stay away from this hotel and any other establishment that profits from animals’ misery.”