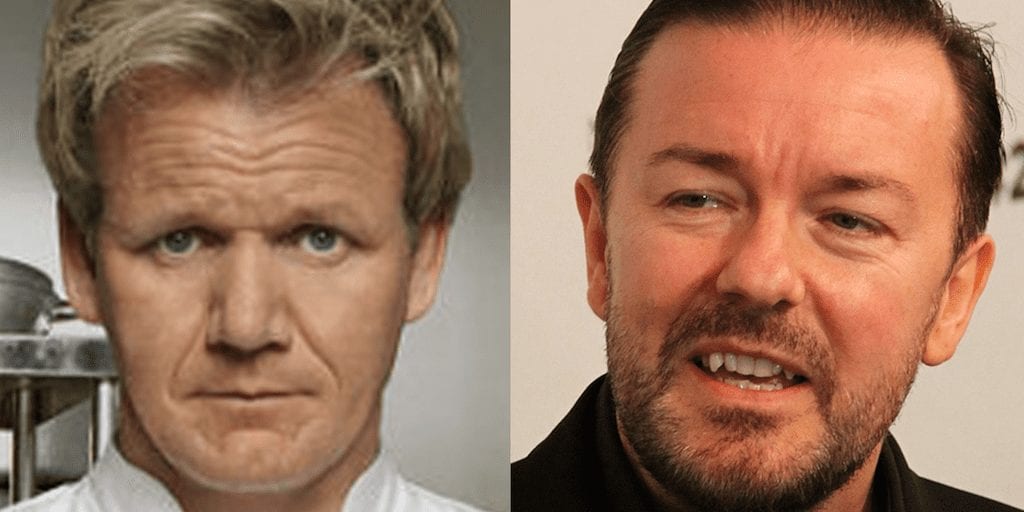 Ricky Gervais has been an increasingly reliable ally of animals in recent years, and the comedian’s unique commentary on the flawed logic of meat eaters has been going on for over a decade now.

Gervais is largely thought to be at least vegetarian and likely vegan – he even confirmed to fans of After Life that the fish and chips he ate on the show were in fact vegan.

The actor and writer has also recently given witty and thought-provoking interviews on the hysterical reaction to Greggs’ release of a vegan sausage roll, and another condemning the fur industry.

But back in 2007, Gervais was still a meat eater – as seen in an episode of Gordon Ramsay’s show The F Word.

The chef dropped by Gervais and his wife Jane Fallon’s table, and asked how he enjoyed the Shepherd’s Pie from the menu.

Ramsay went on to explain how the dish was made from the meat of a goat named Gavin which was kept in the garden of his home.

‘So hang on, they were basically your pets?’ Gervais asked.

Ramsay replied: “They weren’t pets. You can’t fall into the habit of letting them become pets, although they are very friendly to begin with. You’ve got to distance yourself from them.”

But Gervais wasn’t satisfied with the chef’s emotional distance from the animal.

‘Yeah, but when’s it going to end? You and Jeremy Clarkson in a helicopter shooting your cousins? ‘Oh I kept my distance from them, I didn’t know them when I was growing up?’”

Gervais has since seemingly seen the light and realised his love for animals should transfer to his diet.

He regularly posts on Twitter abut his love for dogs, and encourages fans to adopt from shelters rather than using breeders.

He also has condemned horse racing, and given many inspiring interviews on animal rights.

Gordon Ramsay has changed his tune on veganism in recent times, too. The chef has gone from being an outspoken vegan hater to embracing veganism and providing plant-based options in his restaurants.

What do you think of this video? Tell us in the comments section below!