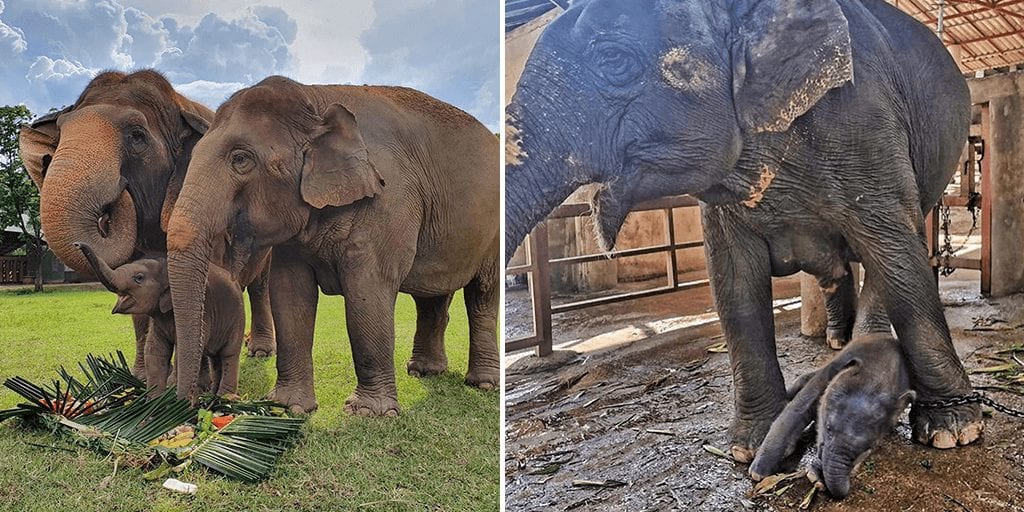 After years of confinement, the two elephants will finally taste freedom in their new 250-acre sanctuary home.

A pair of performing elephants who have spent years entertaining people at Thailand’s Phuket Zoo have finally been rescued.

Elephant Nature Park (ENP)- a 250-acre sanctuary, which rescued elephants Tang Mo and San Mueng said that animals at this zoo were made to perform several tricks including dancing to music, playing musical instruments and throwing basketballs several times in a day under the threat of a sharp ‘bullhook’.

Last year, Moving Animals- a photography and video project dedicated to raising awareness about animal abuse worldwide, released footage of the abuse meted out to both Tang Mo and San Mueng, as well as a baby elephant nicknamed Dumbo, who later died.

The investigation showed that after being forced to perform cruel tricks, the elephants were kept chained in a small enclosure, where the animals kept swaying repeatedly in distress- a sign of a psychological condition called ‘zoochosis’.

But now with the pandemic stalling Thailand’s most crucial source of revenue- tourism, zoos and elephant camps across Asia have shut down and released or abandoned their animals.

“The COVID-19 pandemic has left Thailand bankrupt of its most crucial source of revenue, tourism,” ENP’s Ry Emmerson said.

“This has had a direct effect on Thailand’s elephants leaving them in a very precarious situation facing lack of daily needs such as food and care.”

While the animal shelter has rescued many such elephants during the pandemic, Emmerson added that the sanctuary is heavily dependent on donations to ensure proper upkeep and maintenance of the new inmates.

“Since Covid-19 hit, we have stepped in to support almost 2000 elephants with their daily needs.”

While Tang Mo and San Mueng are enjoying their new found freedom strolling in the vast expanse of the sanctuary, the keepers state the elephants will take some time to adjust to the new surroundings.

“As the two have spent the majority of their lives at the zoo, the transition will take time,” Emmerson said.

“We believe in the healing, beautiful bond these two share and we can’t wait to see them enjoy the rest of their lives together as they remember what it feels like to be an elephant.”

You can learn more about Elephant Nature Park and support their efforts here.