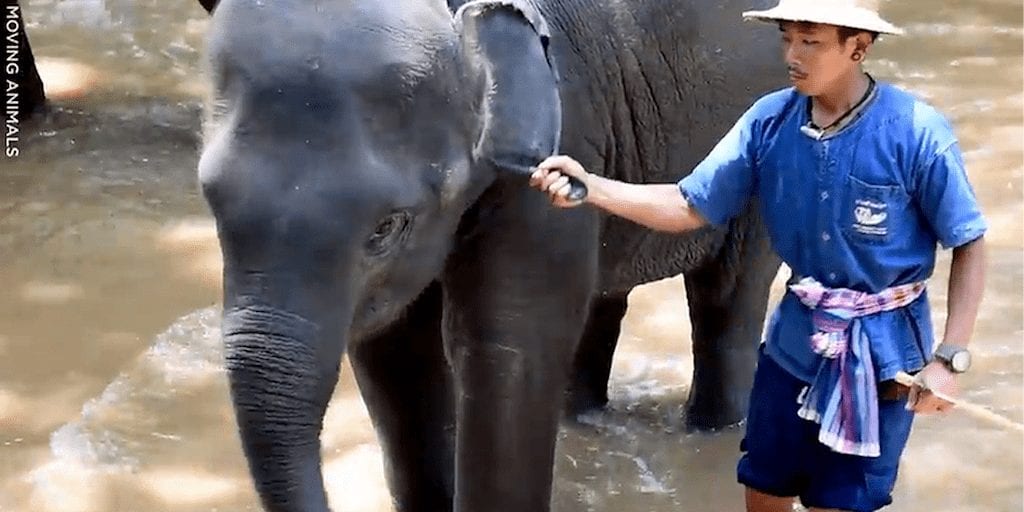 Animal rights campaigners have revealed that elephants are abused with bullhooks and forced to perform for tourists at a so-called ‘sanctuary’ in Thailand.

Activists from Moving Animals have claimed that Maesa Elephant Nursery in Thailand are using the sharp hooks to force them to learn performance routines.

The animal welfare group said baby elephants are separated from their mothers when they are just two years old, and that elephants at the camps are chained up.

The group shared footage of the abuse at the site across social media.

The trainers are also seen tugging on the elephants’ ears so force them to impress onlooking tourists.

The footage was taken in the ‘nursery’ section of the self-described ‘sanctuary’. Tourists pay to watch the babies bathe before going to the performance areas to watch adult elephants complete tricks.

The organisation has more than 20 performing elephants who are made to perform three times a day, and 80 in total, according to activists.

Some elephants are forced to paint, while others throw darts at a balloon with their trunks. Activists say trainers were pinching their ears throughout the performances.

Amy Jones, a spokesperson for Moving Animals, said: “Our investigations across Asia have repeatedly shown that elephants continue to face relentless physical and emotional suffering to take part in rides, processions and performances.

“It is heartbreaking to think that these innocent babies at Maesa Elephant Nursery are at the start of a lifetime of captivity that will feature sharp bullhooks, cruel performances, and severe psychological stress.

“Travel companies are misleading tourists into supporting animal abuse. To save another generation of baby elephants from a lifetime of misery, Defra must act now and ban British companies from selling tickets to elephant ‘attractions’.

“Earlier this year we documented a performing baby elephant named Dumbo who was forced to perform until his back legs snapped beneath him and he tragically died.

“It is heartbreaking to think that the baby elephants at Maesa Elephant Nursery could face the same cruel fate.”