Vegan influencer blasted for switching to a ‘carnivore’ diet 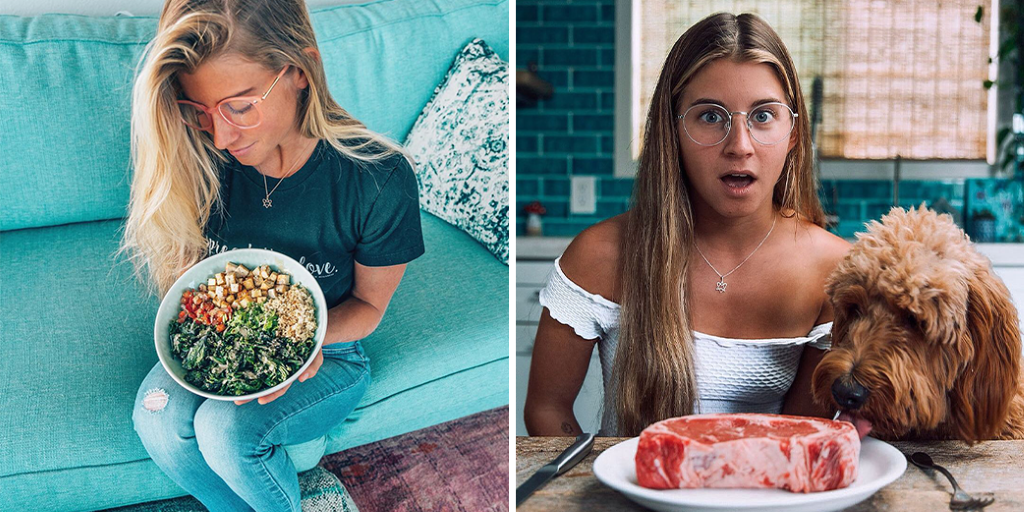 A vegan influencer has sparked fury and confusion among her followers revealing she’s switched to a ‘carnivore’ diet.

Alyse Parker built a following of more than 800k on her accounts which have promoted plant-based eating and healthy exercise.

But she’s mad a dramatic U-turn and revealed she’s only eaten animal products for the past 30 days.

The carnivore diet, which is widely considered unhealthy by health professionals, only allows consumption of meat, fish, eggs and some dairy products.

The diet prohibits all of Alyse’s former diet including vegetables, beans, pulses, legumes, grains and seeds  – which all provide vital nutrients.

Revealing the move,she said: “Coming from being vegan 4.5 years, I was hella resistant to the concept of eating ONLY animal foods (aka only meat, seafood, + eggs)⁣. ⁣

“I didn’t make ANY sense to me. It actually sounded pretty f*cking ridiculous.

“I swallowed my pride and decided I’d give it a shot. Full-on carnivore. I woke up the next morning feeling more mentally clear, focused, wholesome, and healthy than I had felt in years.”

Alyse also said she’s always experimenting with her lifestyle, and has tried not using deodorant for a year and not shampooing for a month.

She said her former veganism was due in part to concerns about factory farming and the impact on the environment, but defended her new position by advising followers to choose grass-fed meat and buying from local farms.

Followers slammed the influencer and many immediately unfollowed her account.

I wonder why this ex-raw "vegan" said she felt way healthier as a month long carny….oh it's because she's getting fucking money for it. ?? pic.twitter.com/2f2ML0mCo9

One person wrote:
Cows experience fear and pain. They have family units. They understand they are going to die when they are butchered. Factory farming of beef is not only cruel to intelligent animals but incredibly awful for the environment. You’re part of the problem, don’t pretend like you’re part of any solution.

These "vegan" influencers that go back to eating meat didn't stop eating animal products for moral reasons. Not eating animal suffering was only a bonus for them. Being vegan is a protest against all animal exploitation and is much more than just eating a plant based diet.

“Being vegan you’d think you’d understand the effects of eating meat on our bodies & more importantly our environment?? You lost all my respect as well,” another added.

What do you think of the carnivore diet? Share your thoughts in the comments section below!