All hope was lost for these four battery hens, until a vegan opened her heart and home to them | Totally Vegan Buzz
Skip to content

All hope was lost for these four battery hens, until a vegan opened her heart and home to them 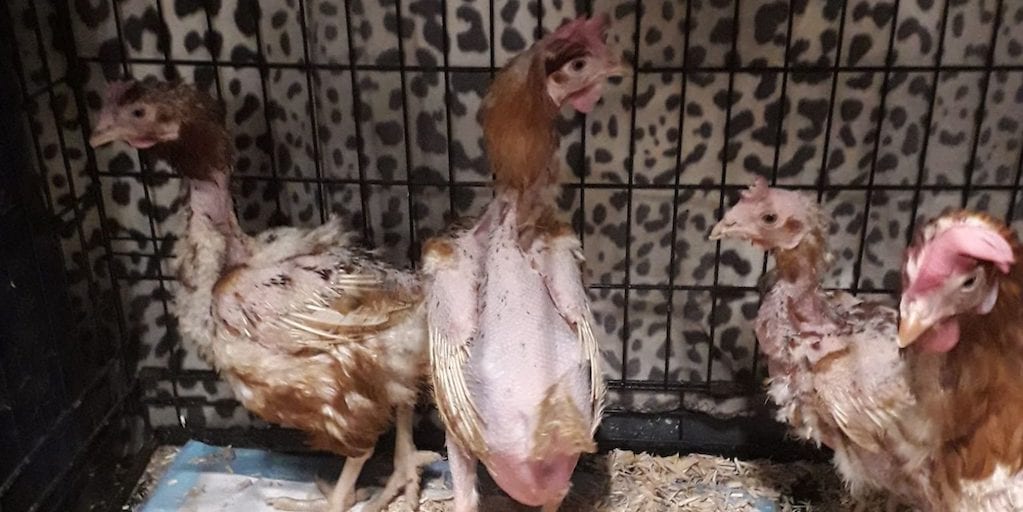 Most battery hens live their entire lives in horrific conditions. But for a few, their terrible luck in life can turn around. Thanks to generous vegans like Dawn Needham, from Ripon, North Yorkshire, there is sometimes light at the end of the tunnel.

After turning vegan last year thanks to influence of her daughter, Dawn decided she wanted to adopt some unfortunate hens. She visited the the British Hen Welfare Trust, and immediately fell in love with four abandoned hens and welcomed them into her family.

When Dawn visited, staff at the rescue centre showed her one hen which was in the ‘worst condition they had ever seen’, Dawn told Totally Vegan Buzz.

“They told me I don’t have to take her, but I did have to. I was so upset I cried,” she explained.

Part of the family

Dawn named the four hens after influential women. The youngest, smallest hen which was in the worst condition, she named Rosa after civil rights activist Rosa Parks.

“Rosa was very poorly, it broke my heart. I’ve never come across a chicken so small. She’s got a toe missing,” Dawn explained.

“Her comb has been pecked off of her head, I think from other hens’ boredom from four of them being stuck in a tiny cage.

“They were all very confused when we first got them. They were really quite tentative. Rosa is still very tentative, she’s unsure of everything.”

See Dawn’s hens enjoying their new chicken house in the video below:

Dawn named one hen Millicent, after feminist icon and suffragist Millicent Fawcett, and another Leisel after the protagonist of novel The Book Thief.

She has appealed to Totally Vegan Buzz readers to suggest a name for the fourth hen in the comments section below.

“I just want to give them a good life. We’re trying to get them to trust us because they have had a terrible time. They are getting better,” Dawn continued.

“Even Rosa has been getting better. We let her out on her own as she’s the smallest and we want to make sure she has enough food.”

Dawn and her husband have three rescue dogs, but until now they have no experience with rescue hens. They’ve set up a play area and chicken house for the hens to sleep, relax and develop.

“Millicent is very inquisitive. Yesterday she made a dust bath, she was trying to get dust into her feathers,” Dawn said.

“It melted my heart because it’s the first time in her life she will have been able to. They didn’t even know how to roost because they’ve ever learned.”

Dawn and her husband have a small garden, so there is only just enough space for four hens.

She added: “I would take more if I could! They’re really friendly. It makes me so happy when I see them go into their little house to sleep, and when they’re acting how they should be in nature.

“I have fallen in love. If anything happened to them now I would be devastated.”

Staff at the rescue centre told Dawn the hens may not all produce eggs, but as a vegan it didn’t bother her.

“They also told me I could feed them tuna, but I said ‘I’m not vegan, I’m not doing that!’ I feed their eggs to them and give them some sweetcorn,” Dawn added.

Dawn’s vegan friend Ruth Christie knitted Rosa a jumper to keep her warm, as she has no feathers.

But others are less sympathetic. “Some of my friends roll their eyes and ask why I’m posting about it on Facebook, and I just say ‘if you don’t like it then unfriend me’,” Dawn said.

“It’s made some people really think about their diets. Five or six of my friends have told me they’re thinking about changing after seeing what we’ve done.”

The appalling conditions battery hens are subjected to leave them traumatised, featherless, malnourished and unloved.

Some hens are discarded, but luckily caring people like Dawn and Peter, and fantastic organisations such as the British Hen Welfare Trust (BHWT), are there to pick up the pieces.

If you want to adopt some unfortunate hens and nurse them back to good health, check the BHWT website to find your nearest branch.

Which influential female should Dawn name her fourth hen after? Tell us your idea in the comments section below!