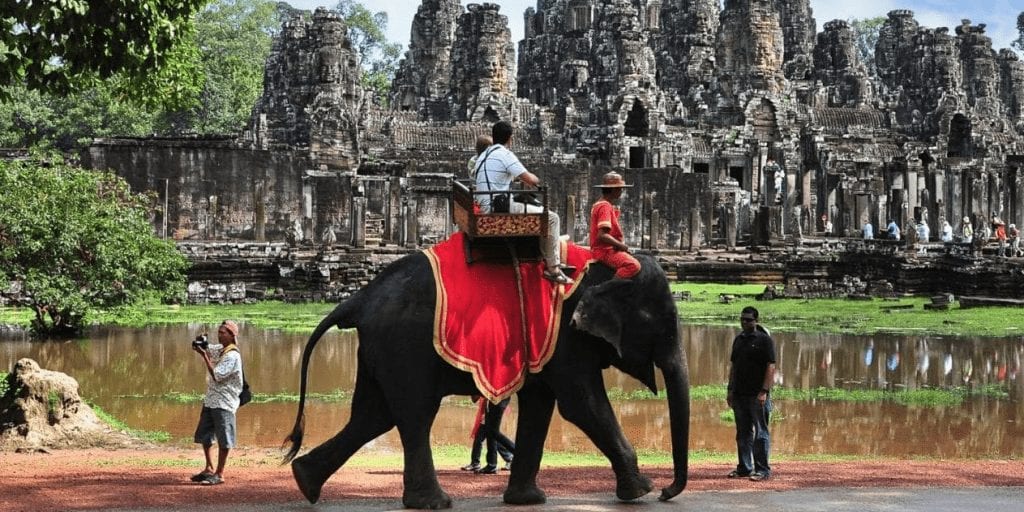 The world’s largest temple complex is routinely filled with tourists who take up offers of elephant rides despite the immense suffering caused to the animals.

2.5 million tourists visit the attraction every year, and currently 14 elephants are relentlessly worked to reel in cash from tourists.

But the Angkor Elephant Group Committee has announced that the exhausted elephants will now be moved to a conservation centre next year.

Animal rights groups have been demanding action over the abuse for years. The systematic cruelty hit the headlines three years ago when one elephant collapsed and died while carrying tourists.

The elephant died died due to high temperatures, heat exhaustion and lack of wind to cool her. The incident repeated itself last year.

The deaths sparked a petition which was signed 14,000 times as public opinion increasingly stacked against elephant tourism.

Oan Kiry, director of the Angkor Elephant Group Committee, told The Metro: “In early 2020, our association plans to end the use of elephants to transport tourists.

“They can still watch the elephants and take photos of them in our conservation and breeding centre. We want the elephants to live in as natural a manner as possible.”

A spokesman for Moving Animals said in a statement: ‘The end of elephant rides at Angkor Wat is truly a watershed moment that shows the tide is turning against cruel wildlife tourism.

“More and more tourists no longer want to pay to see animals in chains or captivity, and attractions where elephant riding continues, need to ban these rides if they are to stay in favour with tourists and animal lovers.”

What do you think of Cambodia’s decision to ban elephant rides? Share your thoughts in the comments below!