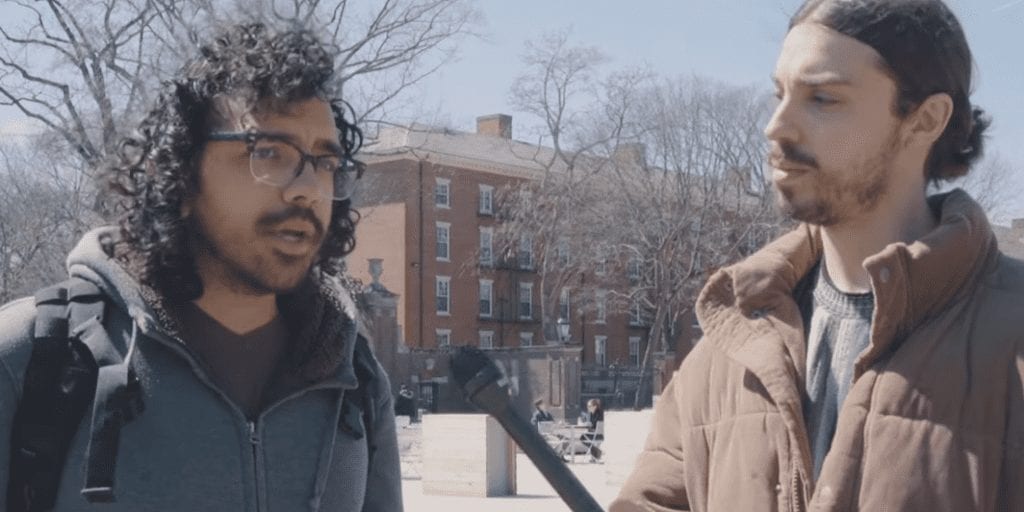 The prominent animal rights advocate has been invited to teach a class at Harvard, along with Columbia, Yale, Cornell, Brown and Rutgers, and the activist used his visit to discuss equality and moral consideration in relation to animals with students.

In a video posted on his YouTube channel, Ed invites pupils to appear in debates on camera and throughout the discussions leaves students fumbling for words and admitting the questions are ‘very tough’.

He initially asks if all humans should be considered morally equal, which students unanimously agree on.

Students give reasoning that humans are ‘intelligent living beings’ who experience emotions such as suffering and joy.

And Ed goes on to ask if animals should be considered in the same way. One student argues that we feel more ‘solidarity’ with other humans than we do with other animals, but admits this may be ‘arbitrary’.

Students generally agree that non-human animals deserve ‘moral consideration’ due to their ability to find joy in their lives.

One student says humans shouldn’t ‘abuse’ animals, and Ed asks her to define what would be classed as ‘abuse’.

He asks when it wouldn’t be abusive to take the life of an animal. She claims that catching and eating ‘free-range wild fish’ and eating them would not be considered abuse.

But Ed asks if it would be morally justifiable to kill a cow in a slaughterhouse after it’s lived a ‘lush’ life in a field, leading to some awkward laughing and the student responding ‘I don’t know’.

“How do we kill them in a way that would be morally justified?” he adds.

“I do think there’s an argument for humans being able to have some level of…dominion over animals and I think there’s a way that could exist so you could do that rightly and do that without being abusive,” she argues.

But Ed questions if ‘cutting an animal’s throat’ objectively speaking could be seen as a violent act.

The stubborn student argues that indigenous cultures kill animals for food in a respectful way, but Ed counters this by asking how in today’s society the majority of people can justify paying for someone to cut an animal’s throat.

“It’s definitely something to take into consideration,” the students admits.

What do you think of Earthling Ed’s video? Share your thoughts in the comments below