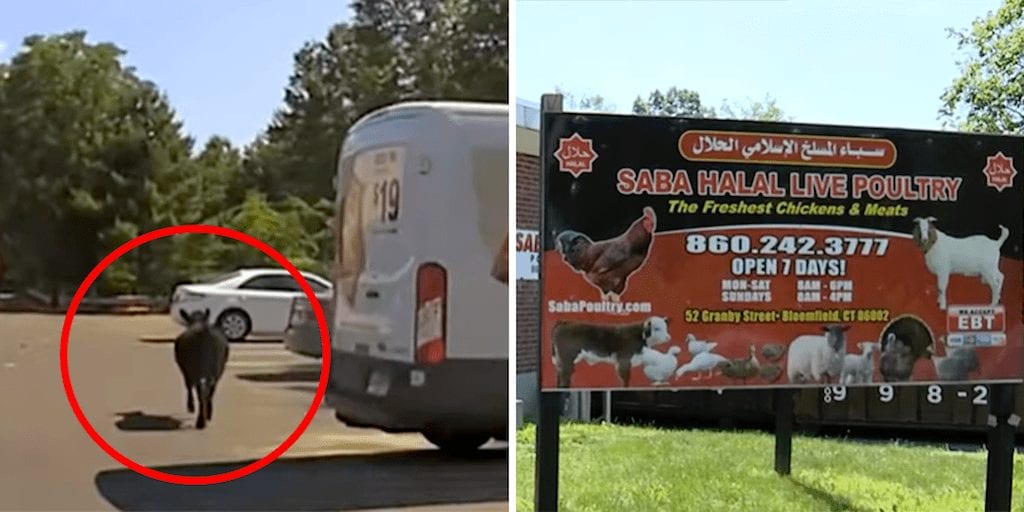 A slaughterhouse worker has been charged for animal cruelty following the exposure of shocking footage which shows a man brutally killing a calf near a farm.

The young cow had escaped from Saba Live Poultry in Bloomfield, Connecticut and is shown on police dashcam and bodycam footage running into a parking lot at a nearby store.

The cow had run across a road, and police had followed the runaway calf and cornered it using their vehicles.

According to local reports, the video shows three employees chasing the calf, and one man fires a crossbow but misses.

Then three men allegedly wrestle the cow to the ground and cut the young throat’s animal with a knife.

Officers were visibly unhappy with their actions, with one heard on camera saying ‘you know this is a problem and not something that can be done’.

“This kid right here just saw you slit a cow’s throat,” he adds.

Following complaints about the incident, officials from the Department for Agriculture visited the business and found ‘unsafe conditions for chickens, rabbits, sheep, goats and other animals’, WFSB3 reports.

The slaughterhouse was closed down for multiple violations, including no fans or air conditioning and overcrowding.

And now the man responsible for killing the animal has been charged with animal abuse.

The man was also cited with a public disturbance and was released on $10,000 bail.

Bloomfield police say the man who killed an escaped cow in a Home Depot parking lot was arrested and charged with cruelty to animals.​ https://t.co/lEPpv8GHsB

Following the horrific incident, animal welfare group PETA held a vigil for the young calf outside the slaughterhouse.

“The dangerous actions of these workers not only meant a heartbreaking death for a cow who clearly wanted to live but also put anyone standing nearby at risk,” the group said in a statement.

“The local police department has expressed concern that the cow was killed in front of a child, but we must remember that from a cow’s point of view, being killed behind closed doors is no less terrifying or painful than being killed in public.

“Why do we cheer for animals who escape from slaughterhouses but not think twice about the millions of others who are killed there every day for the dinner table?

“If you’re uncomfortable with the idea of a cow being slaughtered in a public parking lot, don’t pay workers to kill cows in a slaughterhouse or anywhere else.”

Share this video to reveal the truth behind the meat industry.