Newborn Irish cows beaten, jumped on and dragged by ears in transit to Europe, investigation reveals 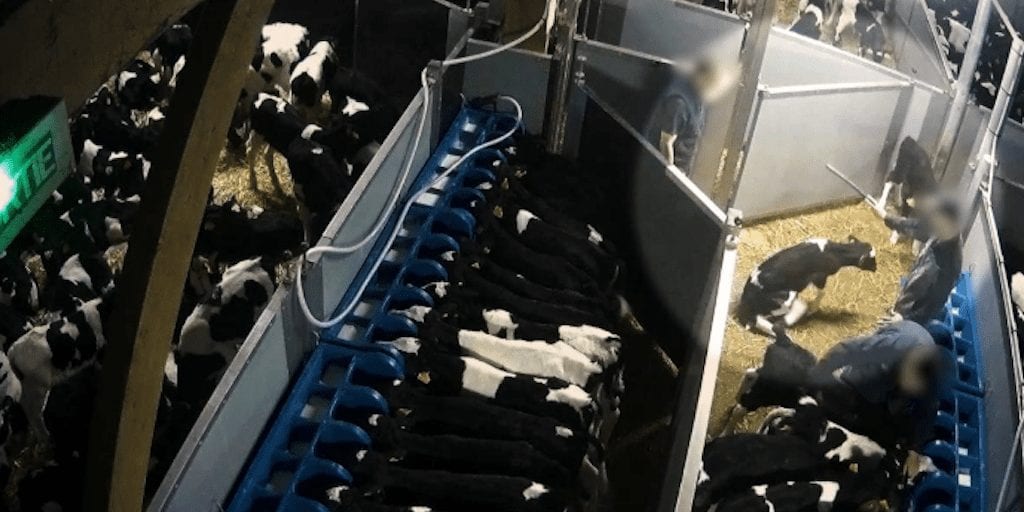 Irish dairy calves were subjected to horrific abuse during their journey to veal facilities in Europe, an investigation has revealed.

Animal welfare groups Eyes on Animals and French organisation L214 worked together to expose horrific practices in the industry.

The report claims it witnessed ‘2-4 week old calves, so young they can barely walk, being beaten, kicked, punched, jumped on, pulled by their ears and denied adequate food and rest’.

“The abuse was so severe, calves were collapsing in pain, dragging their hind legs along the floor unable to get back up, whilst one employee threw a calf to the concrete floor and jumped on his fragile body with full force whilst the other employees watched,” Eyes on Animals reported.

The investigation ran between 14-17 March 2019 and involved trailing 23 Irish livestock trucks and inspecting the conditions the animals were exposed to.

According to investigators, the drinking facilities onboard the trucks were not working or inappropriate for the calves to use. As a result, many calves were unable to drink water during the long journey, including the 18 hour sea journey.

Eyes on Animals estimates that Ireland exports over 100,000 unweaned dairy calves annually to the EU, with Northern Ireland contributing approximately 10,000 calves, making Ireland one of the biggest exporters in Europe.

The majority of these calves are exported to the Netherlands, the largest veal producer in Europe where 50,000 calves are imported from Ireland alone, according to the group.

Nicola Glen, UK & IE spokesperson for Eyes on Animals, said: “It is heartbreaking to see how these vulnerable animals, still unstable on their legs and dependent on their mothers milk, undergo horrific violence during transport to the Dutch veal facilities.

“The Netherlands is the driving force behind these transports and Ireland is the main supplier. Both countries should be taking responsibility for the welfare of these calves.”

Lesley Moffat, director of Eyes on Animals, added: “To put a final end to this vicious circle of the dairy industry producing so many calves that they do not want, we have to re-think the whole dairy industry.

“Either we stop consuming dairy, or the dairy industry incorporates the production of calf meat on the dairy farm by keeping all calves in the herd, with their mothers, and raising them together.

“There are more and more dairy farmers in the UK and also the Netherlands now doing this, and they have our support.”