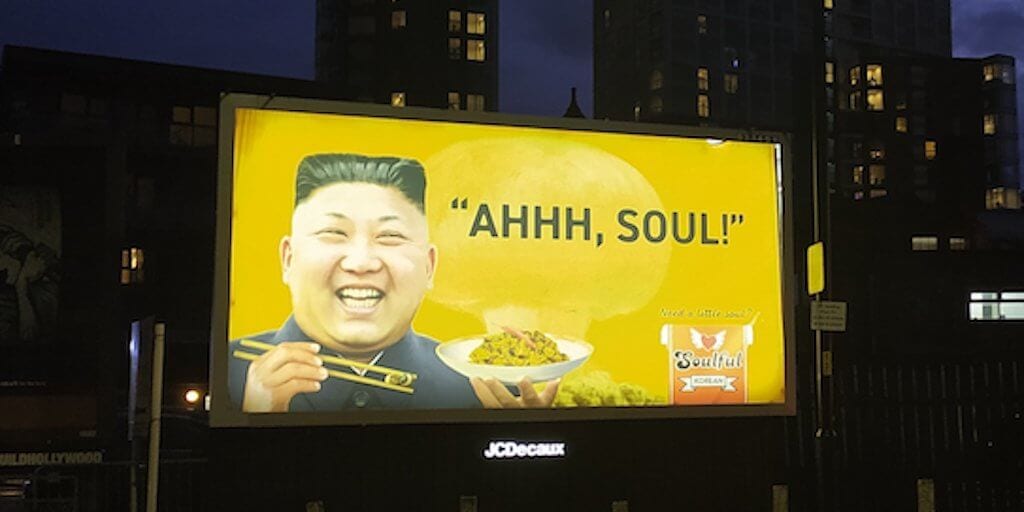 The controversial ads have caused a race row.

A giant billboard ad in Wales promoting a vegan food company has been slammed after passers-by branded it ‘racist’ and ‘disgusting’.

The 50-foot ad on Newport Road in Cardiff by the Soulful Food Co. showed the North Korean dictator Kim Jong Un holding chopsticks and a food bowl with his comment printed to the side exclaiming “Ahhh, Soul.”

According to the Sun, the tagline appears to be fashioned on the words ‘Ah, so’, from the Japanese term ”ā sō,” which is used to show understanding but is also commonly used to stereotype an East Indian accent.

The ad has caused quite a stir on social media with opinions on it divided.

“I just want to know why Soulful Food Co thought such a racist ad would be a good idea in November 2020,” tweeted one user.

“How did it get to this point that NO ONE on your team recognized that this was racist?” another commented. “Do you have any non-white people on it and what positions do they hold? Absolutely ridiculous.”

A third wrote: “Still finding it incredibly hard to wrap my head around how it got to print in the first place.

“You definitely need to make changes in your marketing team to include more people of colour to ensure this doesn’t ever happen again.”

The vegan food company is known to release provocative ads. In another campaign, Soulful Food created a billboard featuring the US President Donald Trump, holding a plate of food and a fork with the slogan: “Mexicans. I love ’em”.

We wanted to bring a little soul to the nation…
What do you think? #needalittlesoul pic.twitter.com/ZXm1CqcZgQ

This ad also attracted flak from some people who asked the company: “What’s your excuse this time @SoulfulFoodCo?

“Are the countless insults by Trump about Mexican people funny to you? Or maybe it’s the 545 children that still haven’t been reunited with their parents after he separated them from at the border?”

Another tweeted: “Absolutely disgusting, especially considering the letter to the advertising industry @CreativeEquals wrote this June. Your brand is profiting off other cultures and you add racist advertisements?”

Yet others praised the ingenuity of the ads calling it “hilarious”, “brilliant” and “sassy”.

“People actually notice things especially when it is controversial… I personally think it is brilliant and brightened up my day,” one tweeted.

Another comment added: “Hilarious. Loving your black humour. Pity so many humourless snowflakes decided to complain about the Kim Jong one.”

Following the Kim Jong Un ad controversy, a spokesman for the London-based vegan food said: “We’re really sorry we’ve caused offence and realise we have made a misjudgment with this advert.

“Our intention was to highlight the world needs more soul right now, but we got the message wrong. We will be taking them down as soon as possible.”