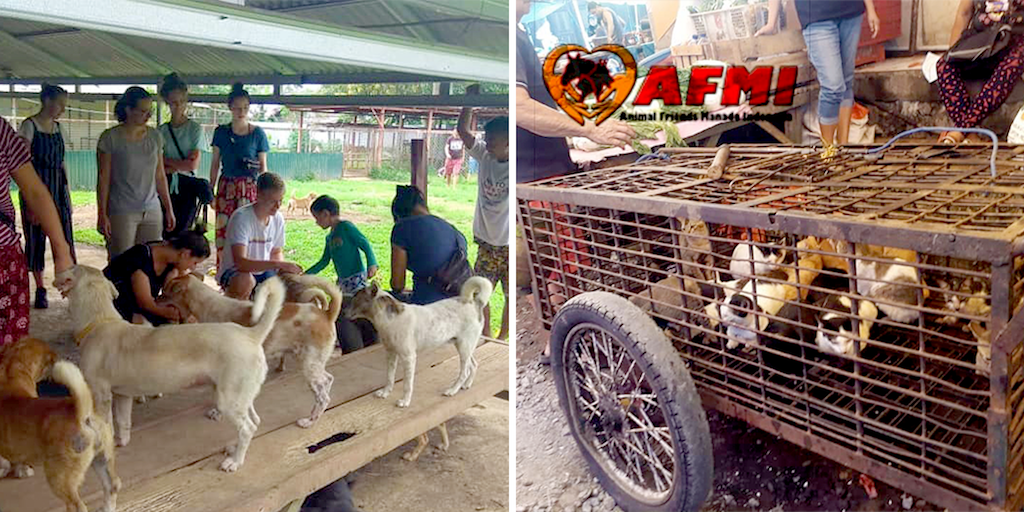 Dog meat may be a common sight on the Indonesian island of Sulawesi, but one man goes to extreme lengths to protect the animals he loves so dearly.

Frank Delano Manus runs a sanctuary for dogs and cats which he rescues from slaughter despite fierce opposition and outrage from parts of the community.

Frank regularly has regularly faced threats and even attacks from both the local Indonesian community who view dog meat as an important part of their culture.

He initially focussed his efforts on educating locals by campaigning in the streets, but he was met with violence.

“North Sulawesi was really harsh about these things,” he told Vice Asia. “One of our programs was to educate, and we were doing campaigns in the streets and these people started shouting at us, cursing us, even throwing rocks at us. This happened for two years.”

One of the biggest issues he faced was the opposition of any foreign influence, as people felt their culture and history was being suppressed.

When an NGO came to help Frank rescue domestic animals from a meat market, local media reported ‘there is a group of foreigners trying to encourage the locals to destroy our culture’.

But Frank persisted despite the abuse, as he believed his message of compassion would eventually get through.

“After that, a lot of people actually started to sympathize with our cause and join our movement, especially after they learned that we were also locals. In the end, we gained their respect and tolerance,” he told Vice.

Frank grew up not far from Tondano, near a meat market where dogs are kept in squalid conditions and treated brutally by traders.

Dog meat isn’t common across all of Indonesia, but in Minahasa where Frank operates it is a well used ingredient.

Frank has done his research to back up his position, having consulted with historians from Manado University and Sam Ratulangi University and finding that the dog meat industry only dates back to the 1930s when Indonesians were struggling with wartime famine.

He now works with Animal Friends Manado Indonesia (AFMI), a charity which saves cats, dogs and other animals from meat markets and looks after more than 100 animals at any one time.

And many of the animals were people’s pets at one time. Frank continued: “In North Sulawesi, one of the most common crimes that happens is domestic animal killings or kidnappings. Ninety percent of homes with pets in Minahasa must have experienced their cats or dogs being stolen at least once in their life.

“In the old days, these kidnappings were called ‘doger,’ wherein the kidnappers would use potassium to kidnap the dogs, but nowadays they just hit the dog or cat in the head until they’re unconscious.”

The group rescue dogs in horrific conditions – with life-threatening injuries and brutal injuries – but with the loving care of Frank and his team, and attention from vets, many recover and live out happy lives at the sanctuary, or are relocated to a new loving family.

What do you think of Frank’s efforts? Share your thoughts in the comments section below!