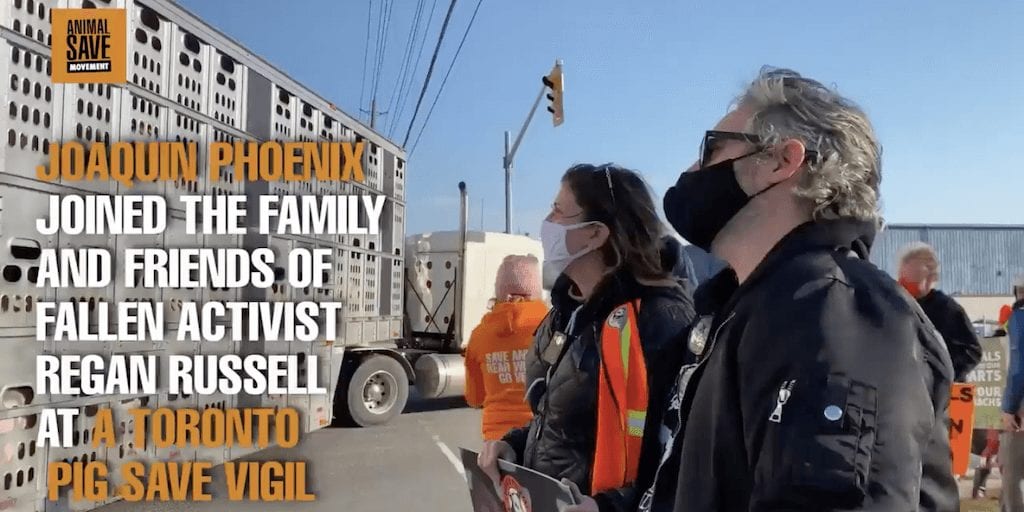 Joaquin Phoenix joined fellow animal activists to attend a vigil and pay tribute to Regan Russell, an activist who was killed by a pig transport truck while protesting outside a pork processing facility in Burlington, Ontario, this summer.

The vigil outside Sofina Foods’ Fearmans slaughterhouse was organized by Toronto Pig Save.

The Oscar-winning actor was seen holding a sign that read: “Fearman’s slaughterhouse showed me no mercy” alongside Russell’s husband, Mark Powell, and her stepson Joshua.

“I’m here to honour Regan Russell and all the animal activists who dedicate their lives to ending this injustice,” the actor was quoted in a statement released by the Animal Save Movement.

‘We will never go away’

The actor had also spoken out at the time of Regan’s death on June 19.

The 65-year-old lifelong activist was part of a vigil with Toronto Pig Save to protest Bill 156, the province’s so-called “ag-gag” law, when tragedy struck.

“Regan Russell spent the final moments of her life providing comfort to pigs who had never experienced the touch of a kind hand,” he said at the time.

“While her tragic death has brought upon deep sorrow in the Animal Save community, we will honour her memory by vigorously confronting the cruelties she fought so hard to prevent.”

He added: “The Ontario government can attempt to silence us with the passage of its Ag-Gag bill — Bill 156 — but we will never go away and we will never back down.”

Joshua Powell said he and his dad “were stricken by [Phoenix’s] humble, courteous nature, and really appreciated the moments we had to talk with him and share stories about Regan.”

Throughout the vigil, Phoenix interacted with fellow animal rights activists and bore witness to the pigs crammed in the trucks en route to the slaughterhouse.

The American actor and long-time animal rights advocate openly advocates a vegan way of living and regularly speaks out against animal cruelty, environmental destruction, and the exploitation of slaughterhouse workers.

Last year, after bagging the award for best actor for his role in “Joker” at the 26th annual Screen Actors Guild (SAG) Awards, the vegan actor headed straight to a pig vigil held by the Los Angeles Animal Save group less than 5 miles away from the awards venue.

The next day, he went about rescuing a cow and her week-old calf from a Los Angeles slaughterhouse.

‘The End of Medicine’

The actor along with his wife Rooney Mara are also executively producing ‘The End of Medicine’, a documentary written by Cowspiracy filmmaker Keegan Kuhn and directed by Alex Lockwood-the award-winning British director of 73 Cows and Test Subjects.

The documentary probes ‘the connection between animal agriculture, environmental destruction and the emergence of zoonotic diseases’.

Earlier, this month, the multiple award-winning actor signed a Turkey-Free Pledge – created by America’s first farm animal sanctuary and advocacy organization, Farm Sanctuary – and is urging people to be compassionate and celebrate a turkey-free Thanksgiving this festival.