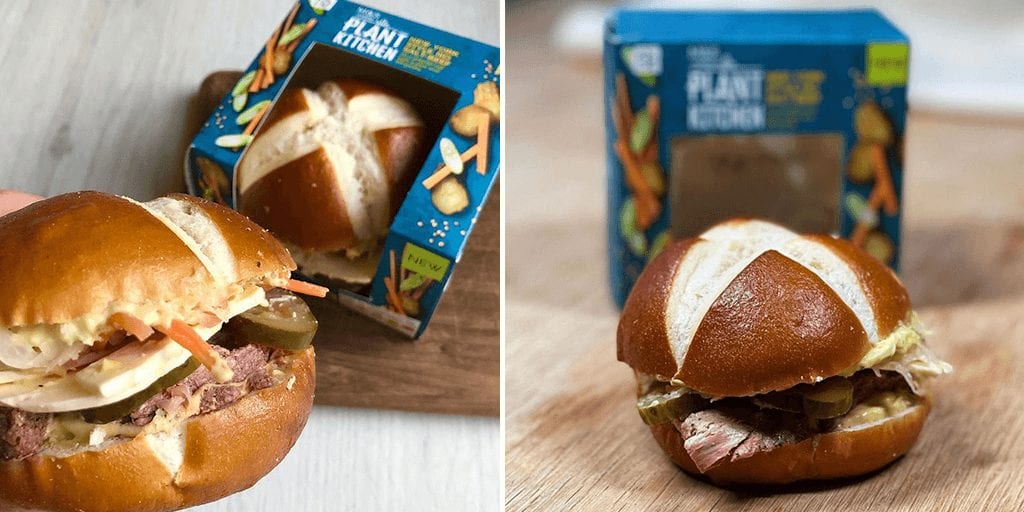 The bosses of M&S are also participating in the Veganuary pledge this year.

M&S has pulled out all the stops for Veganuary this year by launching dozens of new products including vegan cookies, plant-based fish cakes, and no-chicken tenders.

While most of the products have been received well, the £3.50 New York Style No Beef Pretzel Roll which launched on Wednesday has emerged a clear winner.

Described as the best sandwich ever, the vegan alternative is flying off the shelves, with two selling every minute, the Daily Mail reports.

The roll is made with marinated wheat and vegetable protein, tangy sauerkraut, carrot and spring onion slaw, pickled dill cucumber, mustard dressing, and coconut-based cheese all stacked up on a traditional pretzel roll.

Shoppers have taken to social media to heap praises on the new sandwich.

One Instagram user wrote: ‘When I say this was incredible, I mean incredible … 10/10’,

Another commented: “Tastiest sandwich! It’s now replaced the m&s vegan tuna sandwich for me as my ultimate fave!!”

The first is a coconut oil-based cheddar alternative that promises to taste and melt like real cheddar. It is priced at £2.25 for 200g and will be available in blocks and slices.

The other is a coconut-oil based alternative to feta cheese, which the retailer says “tastes and crumbles just like the Greek salad cheese”.

The Plant Kitchen line up also features more meat alternatives, including vegan Chickenless Southern Fried Tenders where you “won’t be able to taste the difference” and ready-to-eat BBQ and Piri Piri No-Chicken Pieces.

The upmarket retailer also has you covered for dessert with its new Vegan Strawberry Cheesecake Wedges.

Described as ‘a thing of beauty’ by Vegan Food UK, the new dessert is made using a plant-based cream derived from lentil protein and mixed with dairy-free cream cheese to create that lovely creamy mouthfeel of a traditional New York-style cheesecake on a crunchy oat biscuit base.

In addition, M&S is launching Vegan Chocolate Chip Cookies at its in-store bakery.

According to the retailer, the dairy-free cookie is “soft, gooey and packed with Belgian chocolate chips”, and is best enjoyed with a glass of Plant Kitchen Chocolate Oat Milk.

The elaborate vegan fare comes at a time when bosses of Marks & Spencer’s have also taken the Veganuary pledge and are encouraging their employees to do the same.

“As the proud owners of the UK’s No1 vegan own-label, Plant Kitchen we’re getting SUPER excited about Veganuary!” M&S Director of Product Development, April Preston, said.

“This year we’re sharing the sign-up links with all our colleagues in stores and support centres, encouraging them to give Veganuary a go – we’ve got lots of amazing new products launching in our Plant Kitchen range, so it’s the perfect time to sample them.

“Our M&S Food leadership team are getting fully involved as well, and will be creating a series of fun, weekly videos that we’re sharing internally of the team sampling different Plant Kitchen products and their meat equivalents and finding out which comes top!”

Share this story to let others know about the elaborate vegan range at M&S.