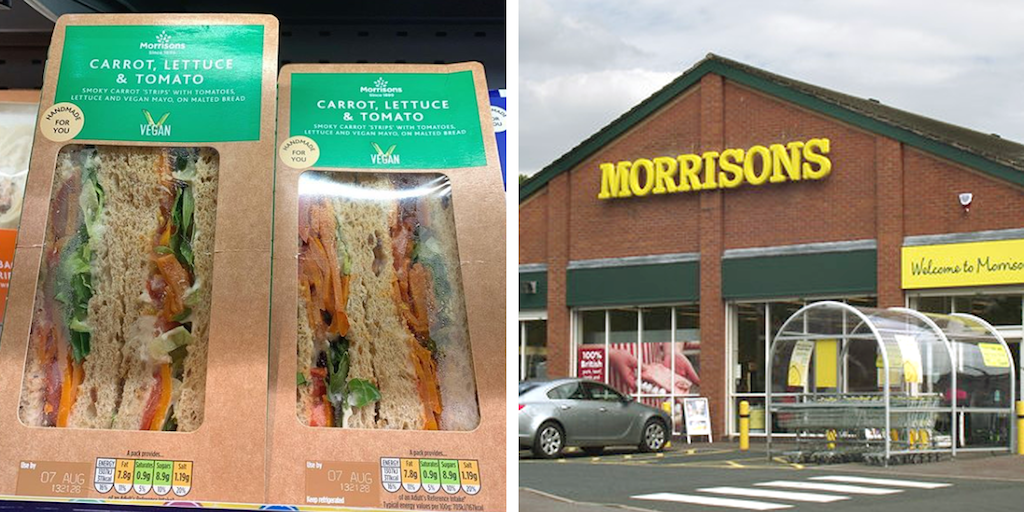 Morrisons in its zest to offer vegans variety introduced a variation on the classic BLT sandwich by substituting bacon with carrot, but the move has backfired and left passionate vegans fuming.

The CLT also includes tomatoes, lettuce and vegan mayo, along with the smoky carrot strips all sandwiched between malted bread. It costs £2.20 and has 317 calories in it.

But vegans are finding it hard to stomach this alternative. Most expressed their ire by venting out on social media platforms.

Stevie Shepherd said, “Not to sound ungrateful but a salad sandwich? No wonder everyone asks where we get our protein.”

Lizzy Entwistle, a registered dietitian, said: “No, I can’t get excited about this. I feel it makes a mockery of vegans. Can’t have bacon? Here, have some carrot.”

Erin Caroline commented, “Apparently no vegans work for them, or there were no public surveys done with vegans, as I guarantee this would not have been suggested.”

Another, called Holly, mentioned, “I’d rather not pay that much for a bit of salad on bread. Seriously, just use slices of tofu or tempeh or even mushroom, Anything but a sad strip of soggy carrots.”

Of course, some veggie lovers were more encouraging; one user, Isabelle urged her fellow vegans saying, “Please don’t knock it before you try it. The carrot does actually taste like bacon because of how it’s smoked and it’s absolutely delicious.”

Nevertheless, many supermarkets and restaurants have started increasing their vegan fares.

Greggs’ vegan sausage rolls have been approved by fans, and even McDonald’s has a vegan range.

Cardiff City has also dished out a full vegan menu at its ground becoming the first football league club to join the Vegan Fraternity.

What do you think of a CLT-sandwich? Tell us in the comments below.