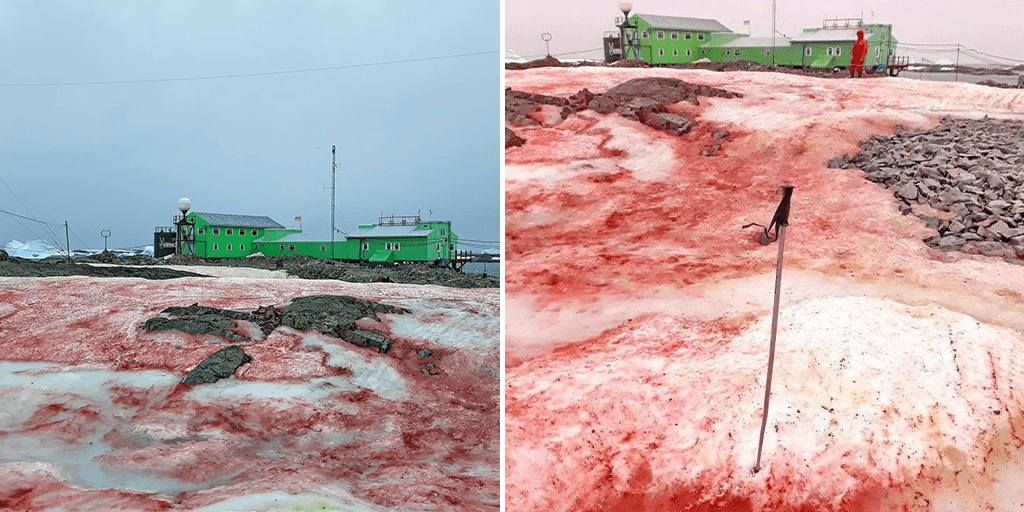 A Ukrainian polar station in the Antarctic has shared pictures of blood-coloured snow, highlighting another worrying influence of climate change.

Images snapped by a Ukranian team of scientists stationed at the Vernadsky Research Base located on Galindez Island off the Antarctic’s coast show swaths of blood snow covering large areas around the station.

Thankfully, the phenomenon is not a result of an en masse massacre, but has been brought on by tiny algal colonies that typically bloom during Antarctica’s summer months.

Known as Chlamydomonas nivalis, these seaweeds remain dormant in winter and thrive in freezing water when warmer temperatures lead to snow melts.

The algae exhibit their characteristic red colour also known as “watermelon snow” when their cells receive lots of sunlight, which helps them produce special red pigments known as carotenoids. The pigments absorb the heat and protect the algae from ultraviolet radiation.

But scientists point out that this phenomenon could have a cascading effect on the climate change that brings about devastating changes in the ecosystem.

Earlier this month, a research station on Antarctica’s Trinity Peninsula, noted that Antarctica’s temperature had reached a record high of 18.3 °C at the Esperanza station and scientists point out that the unseasonably warm weather in Antarctica has triggered a runaway feedback loop.

Rising temperatures cause the algae pigments to absorb more heat leading to the surrounding ice to melt faster. The more the ice melts, the faster the algae thrive, bloom and spread creating a vicious circle of more warming, more melting, and more algal blooming.

A Facebook post by The Ukraine’s Ministry of Education and Science, reads: “Snow blossoms contribute to climate change. Because of the red-raspberry coloring, the snow reflects less sunlight and melts faster. As a result, it produces more bright algae.”

According to the UN’s World Meteorological Organisation, the Antarctic Peninsula has become one of the “fastest-warming regions of the planet” with temperatures rising by almost 3°C over the past 50 years.

A Nature Communications study a few years back showed that algae can reduce the albedo of snow (its reflectivity) by up to 13 percent. As warmer temperatures help the blooms survive longer, this study provides further evidence of the interconnection between the algae, climate change, and the melting of snow across the world.

Share this story to reveal the disastrous effects of climate change on our planet.