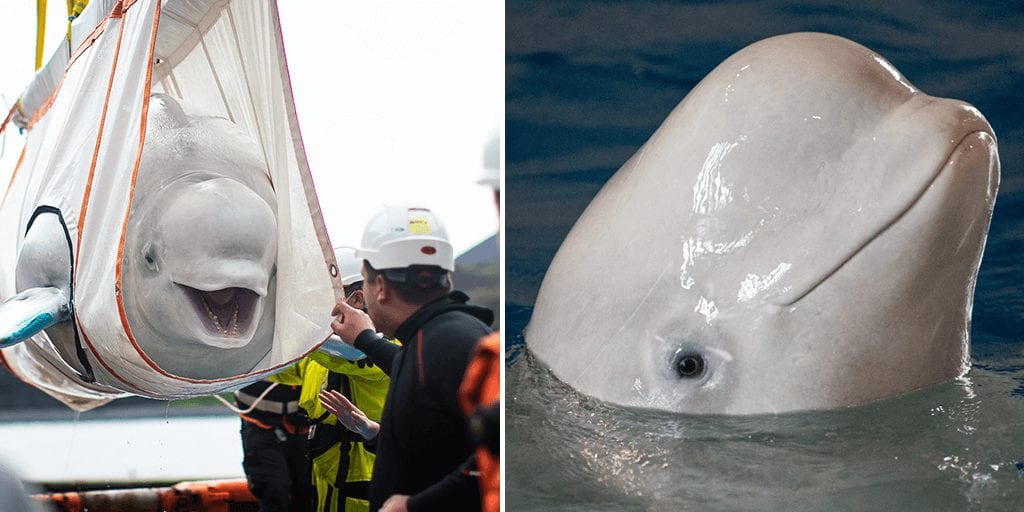 Two beluga whales lived in a Chinese aquarium for nine years before they were rescued.

Little Grey and Little White, who spent nearly a decade living in captivity after being captured at a very young age off the coast of Russia and then being moved to Chengfeng Ocean World in Shanghai to perform in front of audiences will now live freely for the first time.

The whales flew 6,000 miles to Klettsvik Bay, the world’s first open water sanctuary for belugas in the Westman Islands off the south coast of Iceland.

Due to their massive sizes, the transfer operation involved specially designed equipment, veterinarians and gallons of water and ice.

Describing the operation, Padgett told CNN on a video call that the belugas were transported overland on “stretchers” or slings and the team did practice drills to get them used to being moved in trucks, tugboats and cranes.

“It’s been quite the journey for these two,” Beluga Whale Sanctuary’s general manager, Audrey Padgett said.

“It hasn’t been easy, but it’s definitely been a labor of love.”

According to Sea Life Trust, the pair is currently housed in a bayside care pool in order for the pair to “acclimatise to their new natural environment and all the outdoor elements before their final release into Klettsvik Bay.”

“The expert team and the independent vets were with Little Grey and Little White throughout the move and said they are healthy and are feeding after the short trip from their landside care facility back to the sea,” said the charity in a statement.

‘Back to the ocean’

“Following extensive planning and rehearsals, the first stage of their release back to the ocean was as smooth as we had hoped and planned for.”

The final stage of their release in Klettsvik Bay, which is nearly 10 times the size of New York’s Central Park is due in the coming weeks.

The SEA LIFE Trust Beluga Whale Sanctuary is the first of its kind and is striving to keep these beautiful belugas safe, healthy and happy. However, to keep the sanctuary going , it relies on the generosity of its supporters.

You can donate here to help provide Little Grey and Little White with the best possible care – now and in the future.