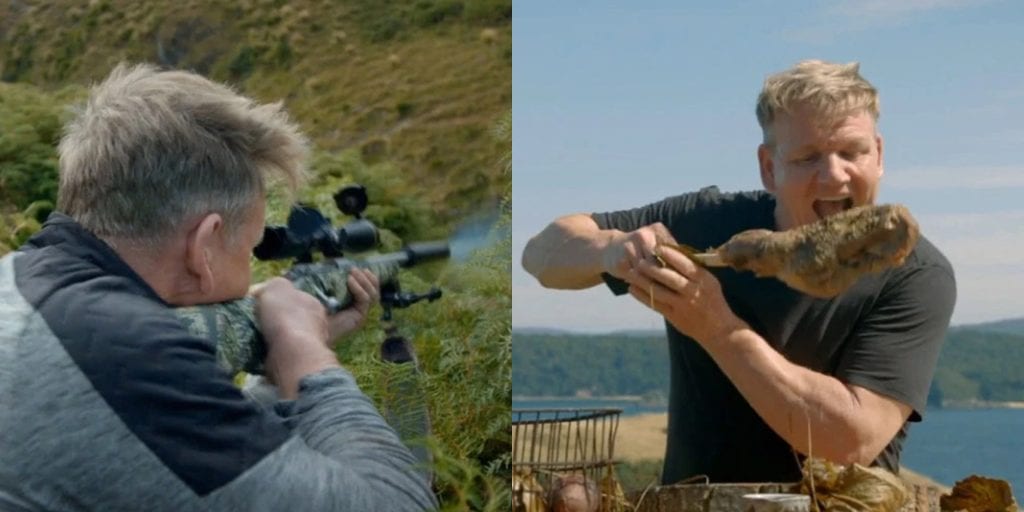 Celebrity chef Gordon Ramsay has come under fire for shooting a goat on his new TV show.

Angry animal lovers branded the chef ‘thoughtless and cruel’ for the New Zealand hunt which was shown on his new Uncharted show.

Viewers slammed him for ‘profiting from the misery, suffering and murder of innocent animals’ for the footage which was aired on National Geographic.

The episode aimed to ‘discover the secrets of Maori cuisine’ in a show which claims to embark on anthropology-through-cuisine expeditions.

National Geographic said Maori people ‘were hunters and gatherers who harvested their food from the mountains, forests, rivers and ocean’.

Ramsay’s guide sent the chef into the wild with instructions to kill a goat, which he shot from distance and later cooked and ate the animal.

Lourdes Caballero tweeted: “Yes National Geographic keep profiting from this planet, keep sending these ‘cooks’… around the world to keep killing all types of animals.

Another woman tweeted: “@GordonRamsay I hate you and your uncharted show!! Passing through channels and saw you just shoot a goat!! You are the worst.”

This is not the first time Ramsay has come under fire from vegans and animal lovers.

Back in 2005 Ramsay hit the headlines when he tricked a vegetarian to eat meat.

On his show Ramsay’s Kitchen Nightmares, the celebrity chef offered a pizza sample to a volunteer at Italian restaurant La Lanterna in Letchworth, Hertfordshire.

He told to the vegetarian volunteer the pizza was vegetarian. But once he took a bite, Ramsay said: “Unfortunately, that pizza has got a lot of mozzarella and tomatoes, but underneath all that there is parma ham.”

Ramsay was involved in a number of high profile anti-vegan stunts and messages, including claiming to be a part of PETA – ‘People Eating Tasty Animals’.

But due to the dramatic rise in veganism, he was forced to take notice and adapt his stance.

As Veganuary grew rapidly in popularity, expanding to more than 250,000 participants in 2019, the chef reluctantly introduced a vegan menu to his London restaurant Bread Street Kitchen.

What do you think of Gordon Ramsay’s new show Uncharted? Share your thoughts in the comments below!