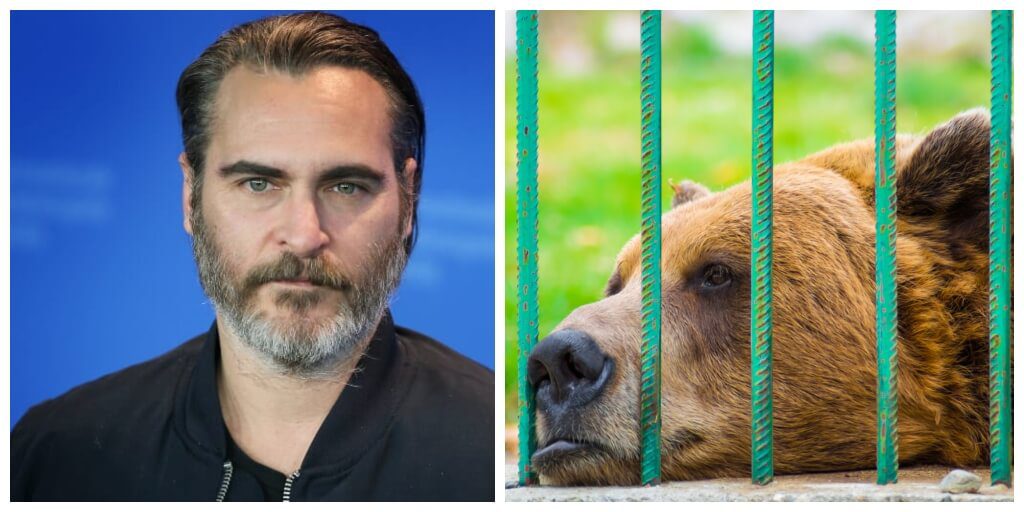 “These bears deserve better than a life on the road, where they are robbed of everything that’s natural and important to them.”

Joaquin Phoenix is calling on Florida’s Bearadise Ranch to release two bears held captive at the roadside zoo and slated to appear at the Mississippi Valley Fair this week.

Bambi and Bruno served as models for Phoenix’s 2003 Disney film, Brother Bear. The 46-year-old actor and animal rights activist voiced the lead character of Kenai – an Inuit hunter who turns into a bear as punishment after killing one.

After learning about the bears’ plight from vegan charity PETA, Phoenix wrote a letter to ranch owner Monica Welde urging her to retire the animals from show business.  He also offered to help arrange for them to be moved to an accredited sanctuary.

“I voiced the movie’s main character, Kenai, who, as a lesson in empathy, is magically transformed to be able to see the world through bears’ eyes, and now I’m asking you to see through their eyes, too,”  the Oscar-winning actor wrote.

“These bears deserve better than a life on the road, where they are robbed of everything that’s natural and important to them, and if you put yourself in their place, I’m sure you’d see that, too.”

He added: “You know firsthand that bears are curious, complex animals who love to climb, dig, forage, and play. Their acute sense of smell and plate-sized paws evolved so that they could seek out mates and food across vast distances, but those carefully honed traits are wasted on the county fair circuit, where they’re relegated to transport cages when they’re not pulling hoops over their heads and carrying basketballs around in front of crowds of strangers.”

Apart from performing in travelling shows, where the animals climb ladders, carry a basketball while walking on their hind legs, pull hoops over their heads, and more, the ranch- which owns and cares for 13 bears – states on its website that they can also be rented for weddings, “bearthday parties” and corporate picnics in addition to work in films, TV shows and commercials.

This isn’t the first time the ‘Joker’ star – who has been a vegan since the age of three – has used his platform to advocate for animals. Last year, he rescued a cow and a calf just hours after his Oscars speech.

Earlier this year, he also featured in a short documentary detailing the slaughterhouse rescue he negotiated last year.

The Shaun Monson-directed film ‘INDIGO’ features Phoenix and his journey of rescuing the animals from Manning Beef in California.

It also has footage of Phoenix’s visit to the rescued animals which now live at Farm Sanctuary.