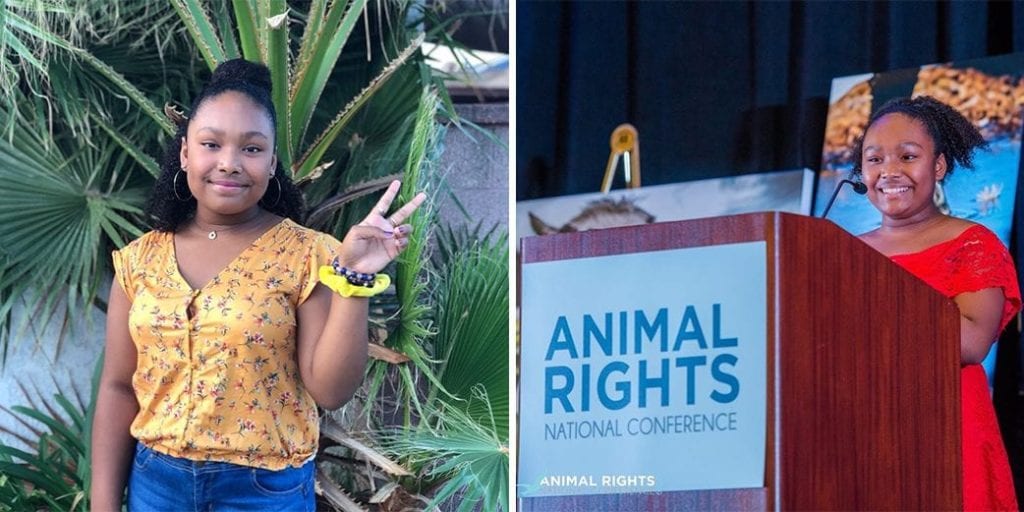 13-year-old vegan activist Genesis Butler has been named PETA’s Young Animal Activist of the Year for her animal advocacy.

PETA held its 14th annual Libby Awards to recognize individuals that are most influential on the animal rights scene.  “Libby” is short for “liberation”, pertaining to liberation of animals.

Genesis Butler barely 13 years of age is a young animal rights advocate and beat three contenders to bag the 2019 Young Animal Activist of the Year award for 2019.

The former Cutest Vegan Kid has inspired countless people since her first TEDx Talk at the age of 10 on her vision for healing the planet and calling out the meat and dairy industries for their role in the global climate crisis.

Her campaigning for animals has seen her give talks across the U.S. and Canada.

I am asking the Pope to go vegan for Lent because of his influence on people and because of his love for animals and his concerns for the planet. There is a full page ad with my letter today in the New York Times and lots of newspapers around the world. The @milliondollarvegan team worked very hard on this campaign for months. They are amazing! I hope the Pope says yes because he will be able to help save billions of animals if he does because so many people will do the same ❤️ for more information on the campaign visit www.milliondollarvegan.com link is in my bio! Regrann from @milliondollarvegan – BREAKING NEWS: @paulmccartney , @moby , @menasuvari , @woodyharrelson and hundreds more amazing celebrities, scientists, and doctors support our global #vegan campaign. ? — Find out why this campaign is making headlines and exciting people everywhere at MillionDollarVegan.com [link in bio] ? — Help us spread the word! Share this news widely. #milliondollarvegan #veganlent #veganpope #popefrancis #govegan #whatwouldjesussay #veganfortheanimals #veganfortheplanet #veganforhealth

Last year she even campaigned for Million Dollar Vegan urging Pope Francis to ditch animal products for Lent in exchange for a $1 million donation to a charity of his choice.

My Marvel Hero comic book ❤️ I’m honored to be a Marvel hero. I think the biggest heroes on my cover are the animals because they have unconditional love, they are protectors, and they go through so much yet they still do what they can to survive. I like to see my comic book as a representation of all the heroes in the animal advocacy movement and that’s all the animals and humans who advocate for them. You are all heroes! Thank you for all you do for the animals ❤️❤️❤️ . . Photo by the amazing @bethlilyredwood My friend Sid lives his best goat life at @newlifeanimalsanctuary #marvelhero #marvelheroproject #disneyplus #animalliberation #youthactivist #earthwarrior #environmentalist #vegan #plantbased

Currently, she is busy in getting her own comic book for the upcoming Marvel’s Hero Project series, a documentary highlighting the positive impact young heroes “are making in their own communities across the country.”

I’ve seen pigs before they are going to be killed for food so I know how terrified they are and when I look into their eyes I can see the abuse they’ve been through. They are just babies who want to live just like you and I. repost @milliondollarvegan Pigs killed for food are just babies. ? Genesis (@genesisbutler_) knows, she's seen them!

“Whether she’s talking to the pope or to kids just like her, Genesis never misses an opportunity to encourage people to show compassion for animals,” said PETA Senior Director of Youth Programs Marta Holmberg in a statement.

“PETA is recognizing her for being a superhero for animals every day and inspiring others to do the same.”

I’m really excited to be speaking at the AR conference in Washington D.C. this year! Who is going? See you there!

The other winners for the year 2019 in different categories included: Billie Eilish (Best Voice for Animals), Millie Bobby Brown (Best Side Hustle for Animals), and Greta Thunberg (Youth Role Model of the Year).

In a separate awards event, PETA honoured Joaquin Phoenix with the ‘Person of the Year’ award.

“Joaquin Phoenix never misses an opportunity to turn the spotlight away from himself and onto animals’ plight and to set a great example of walking the vegan walk,” said PETA founder Ingrid Newkirk in a statement.

How influential is Genesis Butler’s activism? Share your thoughts in the comments below!