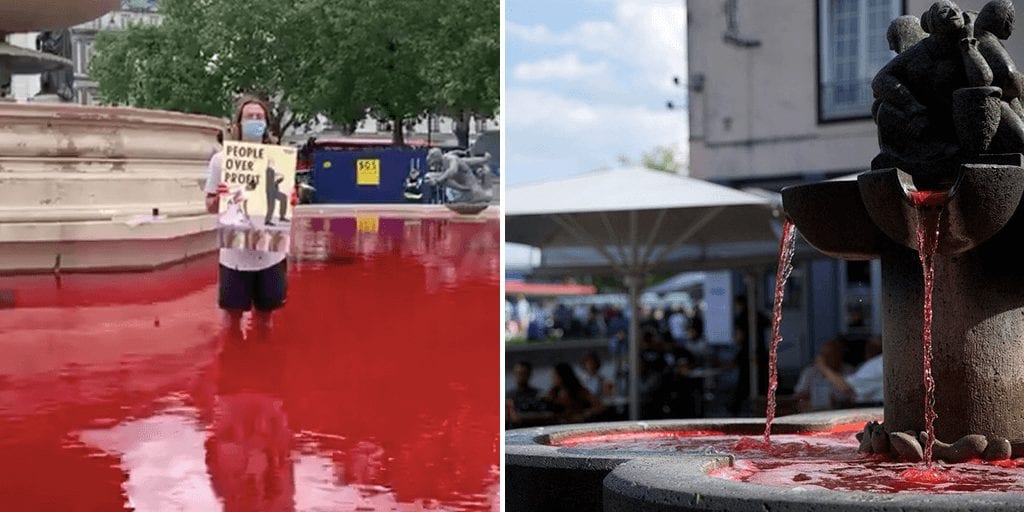 Some of the demonstrators stood in the water carrying placards, which read “global boiling” and “don’t bait me” while others staged a socially distanced around the landmark holding banners reading “animals bleed for human greed” and “Planet over profit”.

According to Animal Rebellion, the group behind the protest, animal agriculture is the real cause of the COVID-19 crisis and the UK government has blood on its hands for allowing the exploitation of trillions of animals for food each year.

Animal Rebellion have now dyed the Trafalgar Square fountains red, symbolising the blood that is on the hands of the UK Government. We are here today to demand that the government prevent future pandemics by ending animal farming and transitioning to a plant-based food system. pic.twitter.com/FAA6tW1wn1

“We are here today to demand that the government prevent future pandemics by ending animal farming and transitioning to a plant-based food system,” the group declared in a statement.

The group organized simultaneous protests in 20 cities, including Bristol, Brighton and New York.

In a post to Instagram, the group wrote: “The government needs to put an end to animal agriculture to prevent future pandemics and to help mitigate the worst effects of climate breakdown.

“The government has blood on their hands and are responsible for the suffering and deaths of trillions of animals used for food every year.⁠

⁠“We demand the government to make bold changes, support industries to transition to sustainable industries, a plant based food system, and support the people, planet and animals.

The coronavirus, which is popularly believed to have originated from a wet market in Wuhan, China, towards the end of 2019 continues to cause unprecedented economic devastation and loss of human lives even after seven months prompting scientists, conservationists and members of the public to call for a global ban on wildlife trade and factory farming.

Kieran Blyth, a representative for the group, said: “These unsatisfactory and dangerous measures will only increase the risk of future pandemics. The government is playing with the potential of tens of thousands more deaths.”

The Metropolitan police have arrested two of the demonstrators on suspicion of criminal damage.

Share the news to let others know of Animal Rebellion’s protest against factory farming.