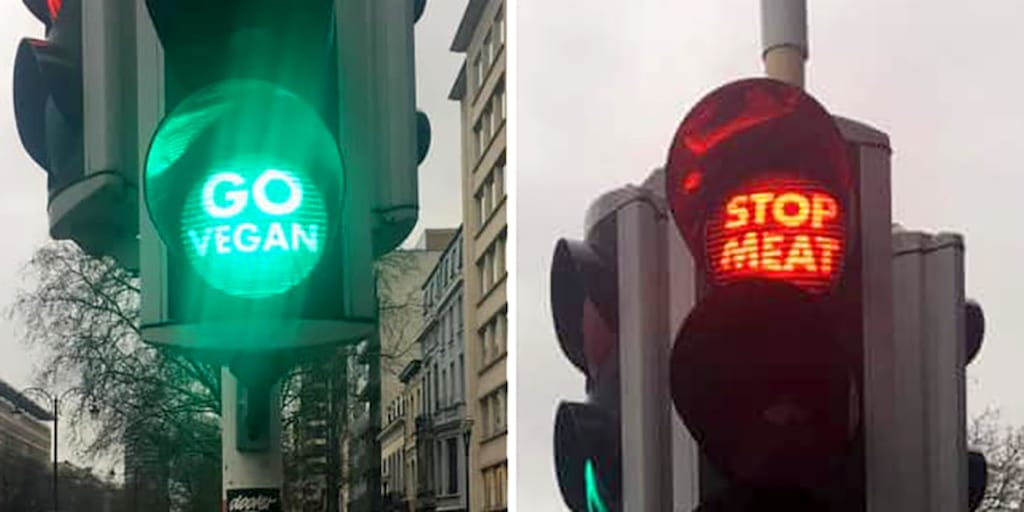 The rise of veganism knows no boundaries, it seems, after traffic lights in Berlin started promoting the plant-based cause.

As the red lights flashes drivers are told to “stop meat” as they wait patiently, while green order them to “go vegan”.

Traffic lights across Berlin-Mitte and Friedrichshain-Kreuzberg in Germany’s capital have been flashing the messages thanks to stickers slapped on the lights.

Berlin police claim unknown local activists are behind the traffic signal messages. However, the police don’t intend to press charges as the messages can be easily removed.

Meat and climate change has been a hot topic in Germany in recent times. Officials recently proposed hiking the meat tax to 19 percent from the current rate of 7 percent to encourage the consumption of more plant-based products.

Politicians believe the tax would help Germany’s goal of reducing its greenhouse gas emissions by 31 percent by 2030.

The street signs, which vegan activist and artist Misteruncertain has taken credit for, also appeared earlier this year in Brussels.

He wrote on Facebook: “Nice to see my efforts spreading far and wide. So many people spend their time living halfhearted and disinterested in others. It takes courage to be altruistic in a society that is self-centered and to be compassionate in a world that is egotistical.

“One act can transform the very core of someone else’s life,” he added. “When benevolence is real, boundaries are nonexistent, limits fade, life is more abundant, and the gap between present reality and dreams, close.

“Animals are innocent beings and deserve to be protected and respected, not massacred for human greed. Veganism is the answer and justice for all life!”

How effective is this form of activism? Share your thoughts in the comments below!