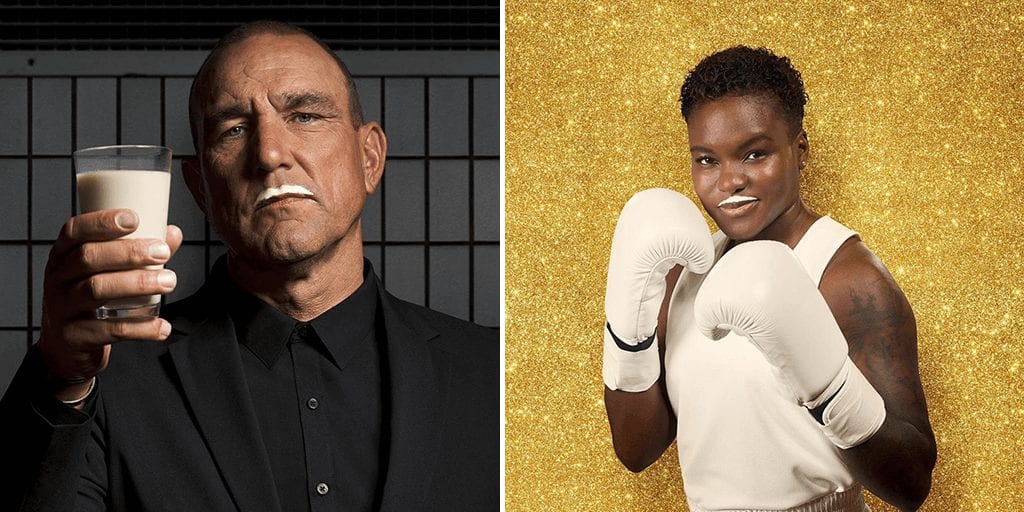 The new ad is a plant-based parody of the famous 2010 ‘Make Mine Milk’ marketing campaign, which featured the trio among others, all of whom sported milk moustaches.

The decade old campaign was launched by Milk Marketing Forum at the time to help boost sales of dairy milk.

Since then the three celebs have switched to a plant-based lifestyle.

According to Alpro’s UK & Ireland marketing director David Jiscoot, the new ‘Make Yours Oat with Alpro’ ad will help “open the eyes of shoppers to the fact there are other choices,” the Grocer reported.

“A lot can change in a decade. Ten years on from the launch of an iconic dairy ad, and three of its original stars have made the move to a more plant-based lifestyle, along with millions of others,” he added.

The campaign launched on 29 June will run until the end of July.

‘I know what’s good for me’

Former footballer turned Hollywood hardman Vinnie Jones sharing the posters on his Instagram captioned them: “I know what’s good for me. Question is, do you know what’s #GoodForYou?”

“10 years is a long time and I’ve got a little bit older (watch it…) and a lot wiser, which is why this time ’round, I’m rocking a mOAT-stache,” he wrote.

“Take a leaf outta my book and grab life by the OATS, and Make Yours Oat with Alpro.”

“I was a bit reluctant to have a good shave before the shoot and lose my rugged good looks—but I think the “moat-stache” looks pretty damn good on me. I’m taking it back to Hollywood.”

Wow 10 years has just flown by… In 2010 I didn't even have my first Olympic gold! Fast forward to 2020 and I've got not 1 but 2 golds! Even though I’ve hung up my gloves, my health is still really important to me. Being constantly on the move, doing everything I never had time for when I was training, I need something quick to keep me going and nothing hits better than a good smoothie! And my smoothie secret weapon? It's got to be @Alpro Oat Unsweetened. No sugars and no sweeteners at all! #GoodForYou #MakeYoursOat #ad

Recounting her journey since winning her first-ever GB Amateur Boxing Championship in 2010, the athlete told in a statement: “So much has happened in the 10 years since, including hanging up the gloves, but one thing has remained constant – my commitment to staying fit and healthy.

“Adding more plant-based foods to my diet has helped me to up my fibre intake, and keep my sugar intake to a minimum.

“I’m a big fan of Alpro’s plant-based drinks, and I’m thrilled to don the ‘moat-stache’ to support the Make Yours Oat campaign.”

Singer Lott’s poster is accompanied with the message “Lotts can change in 10 years”.

“10 years really do fly by, boys and girls, but how could I forget sporting a milk ‘tache on posters across the UK for the original dairy campaign,” said Lott, who now eats a completely plant-based diet in a statement.

“Lots has changed since 2010, and plant-based has become a big part of my life, so I was delighted Alpro asked me to rock the ‘moat-stache’ in 2020.”

Jiscoot shared the campaign aims to “cheerlead the small, positive changes that Vinnie, Pixie and Nicola have all made over the past 10 years – and hopefully inspire even more people to get with the times and do the same.”

As part of the campaign, he added: “Each celebrity will be paired with a different product to showcase the different oat options we have to offer.

“They will highlight ease of usage by sharing quick, easy and great-tasting plant-based recipes on their social channels.”

What do you think of Alpro’s campaign? Share this story to promote vegan milk options.