The beef industry is drying up rivers in the US, study reveals | Totally Vegan Buzz
Skip to content

The beef industry is drying up rivers in the US, study reveals 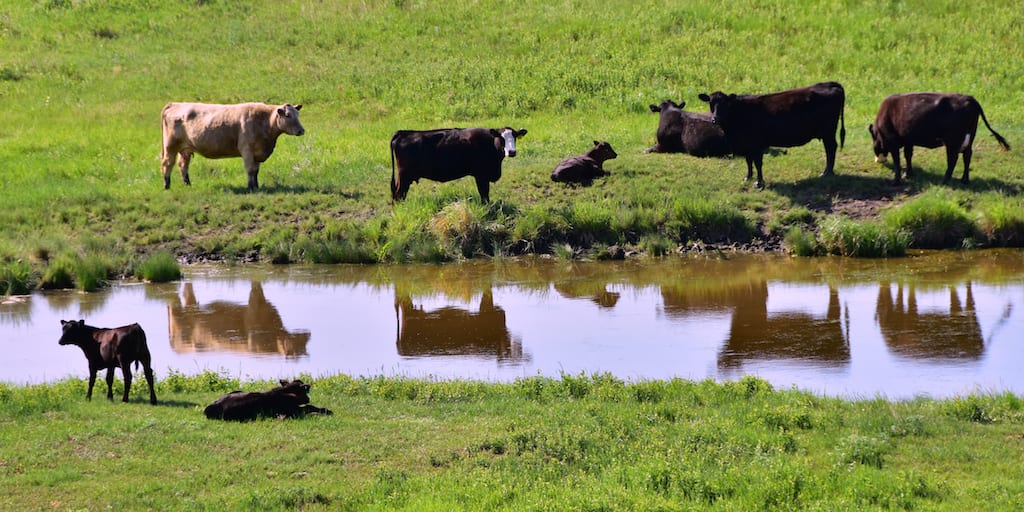 Researchers have found that growing cattle feed crops for the beef and dairy industries is rapidly depleting water levels in rivers of Western United states.

In a new study published in Nature Sustainability, researchers implicate the beef and dairy industries for consuming water resources faster than the resources can be naturally replenished.

The study was conducted to determine which sectors within the US economy and which crops contributed the most to unsustainable water usage.

“We looked at agriculture, industry, domestic use, and thermoelectric power generation and quantified what their water demand is on a monthly basis,” said Kyle Davis, assistant professor of Geography and Spatial Sciences and Plant and Soil Sciences and co-author of the study.

The research showed that the Irrigation of cattle feed crops is the largest consumer of water resources regionally and nationally. While one-third of all the water across the western US is used to grow feed crops like alfalfa and corn to feed beef and dairy cattle, the amount is more than 50 percent in the Colorado River basin.

The team also highlighted that the rampant use of water for feed crops not only depleted water levels, but also threatened the survival of fish and other aquatic species.

They estimated that nearly 700 species of fish faced the risk of extinction, especially in the summer season since the region witnesses water flow depletion due to seasonal variations, which was further aggravated by water-intensive activities like irrigation.

According to Marguerite Xenopoulos, an aquatic ecologist at Trent University in Ontario, “The summer—that’s the growth season for many species of fish, when the water is needed the most.

“When water is taken out of the river, and it’s tied to some aspects of species life cycles of the fish, they can be particularly hard hit.”

“When you layer on climate change with the other issues the rivers are already facing, you end up with a double or a triple whammy,” added Xenopoulos

“We should be worried. This should be a wake-up call.”

The study also traced the cities that consumed the highest amount of beef from these river water depleted areas and found cities such as Los Angeles, Portland, Denver and San Francisco to be the highest consumers of beef highlighting how food choices in one area of the country significantly impacted a completely different region.

“By thinking about where our food is coming from and what resources are needed to produce it, we can make more informed decisions about the impacts of our diets,” said Davis.

He added that if the current trend continued then there could come a point that some rivers and groundwater levels would no longer have any water to support irrigation.

The research team suggested that there was an urgent need to come up with solutions to tackle the looming problem and recommended fallowing programs that involve paying farmers to not plant anything in their fields for a particular growing season in an effort to lessen the burden on these strained resources.

“Many farmers are eager to improve the sustainability of their enterprises as long as it makes economic sense,” said Davis.

“Developing incentives aimed at the biggest water users is a common-sense approach to realize the largest benefits for reducing water scarcity.”

“We can control the amount of water we allocate to different things,” noted Xenopoulos.

“We can try to grow food that uses less water. This is an easier issue to fix than climate change because that’s such a bigger-scale problem. So let’s focus here and find some answers,” she added.

Share this story to reveal how beef and dairy industries are exploiting water resources.