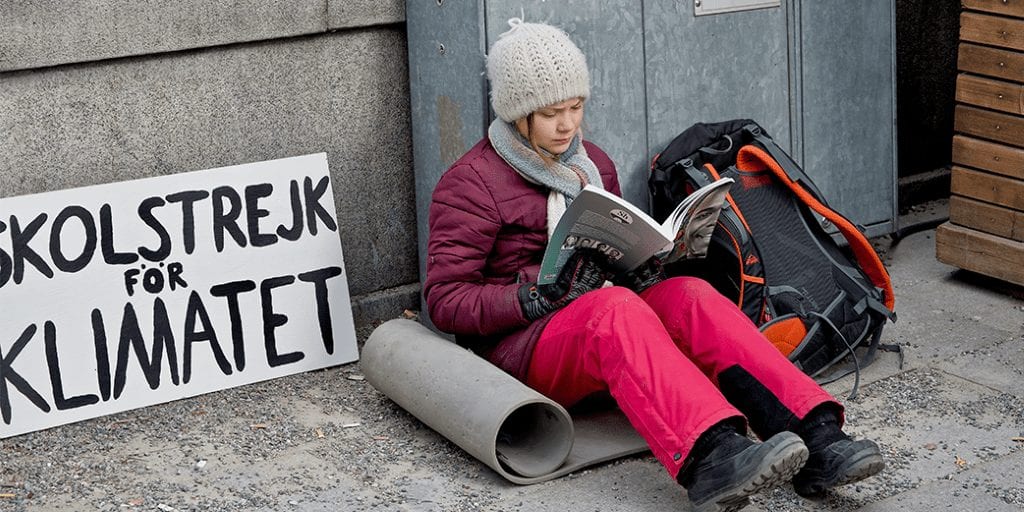 Time named Thunberg its 2019 person of the year continuing a tradition it started way back in 1927.

The magazine normally awards the accolade to a person or persons who “most influenced the news and the world” in the past year and Thunberg has become the youngest recipient of this title at 16 years of age.

According to Time, Thunberg won the title “for sounding the alarm about humanity’s predatory relationship with the only home we have, for bringing to a fragmented world a voice that transcends backgrounds and borders, for showing us all what it might look like when a new generation leads.”

“She became the biggest voice on the biggest issue facing the planet this year, coming from essentially nowhere to lead a worldwide movement,” said editor-in-chief Edward Felsenthal on NBC.

Thunberg’s crusade against climate issues began in August 2018, when she bunked classes most Fridays to protest outside the Swedish parliament building in Stockholm. Her protests subsequently snowballed into a worldwide movement that became popular with the hashtag #FridaysForFuture.

The 16- year old  has come a long way since her school strikes. She has rallied at international conferences, called out political leaders for their apathy in dealing with the eco-crisis and catalyzed a global movement by inspiring 4 million people to join the global climate strike on September 20, 2019.

On the personal front, she has ditched air transport and gone vegan to cut her carbon footprint and lead by example.

“For me none of this is a sacrifice, I don’t need those things. I understand that some people see it as a sacrifice,” reported SPH Digital News

Earlier this year, Thunberg was nominated for a Nobel Peace Prize along with scooping the prestigious Prix Liberté and the GQ ‘Game Changer of the Year’ award.

In October, she was nominated by the Nordic Council in Stockholm for an annual environmental prize with a financial award of about $52,000.

She refused the prize money explaining that people needed to pay more attention to science and less time on awards.

Greta Thunberg speaks quietly but forcefully, articulating the palpable sense of injustice that often seems obvious to the very young: adults, by refusing to act in the face of extraordinary crisis, are being foolish at best, and corrupt at worst. To those who share her fear, @gretathunberg's blunt honesty is cathartic. To those who don’t, it feels threatening. She refuses to use the language of hope; her sharpest weapon is shame. In September, speaking to heads of state ahead of the @unitednations General Assembly, Thunberg pulled no punches: “We are in the beginning of a mass extinction, and all you can talk about is money and fairy tales of eternal economic growth,” she said. “How dare you.” In this photograph, Thunberg writes in her journal on the train as she travels from Lisbon to Madrid for the current U.N. climate conference. Read more at the link in bio. #TIMEPOY Photograph by @evgenia_arbugaeva for TIME

Time’s Person of the Year

Before the nomination, Greta  appeared in the Time magazine edition named  ‘2050: How Earth Survived’ that highlighted the works of the ‘15 Women Who Will Change The World’.

Wow, this is unbelievable! I share this great honour with everyone in the #FridaysForFuture movement and climate activists everywhere. @time

In an interview with Time at the time, Thunberg said: “We are children saying, ‘Why should we care about our future when no one else is doing that? And why should we bother to learn facts when facts don’t matter in this society?’ When children say something like that, I think adults feel very bad.”

“I’m not planning to stop this movement, and I don’t think anyone else is either,” she added.

After Time’s declaration, the activist tweeted: “Wow, this is unbelievable! I share this great honour with everyone in the #FridaysForFuture movement and climate activists everywhere.”

“We can’t just continue living as if there was no tomorrow, because there is a tomorrow. That is all we are saying,” she told Time magazine.

“Meaningful change rarely happens without the galvanizing force of influential individuals, and in 2019, the earth’s existential crisis found one in Greta Thunberg,” summarized Felsenthal.