Cambodian slaughterhouse worker bursts into tears as he kills dog: "If I don't kill you, I can't feed my family" | Totally Vegan Buzz
Skip to content

Cambodian slaughterhouse worker bursts into tears as he kills dog: “If I don’t kill you, I can’t feed my family” 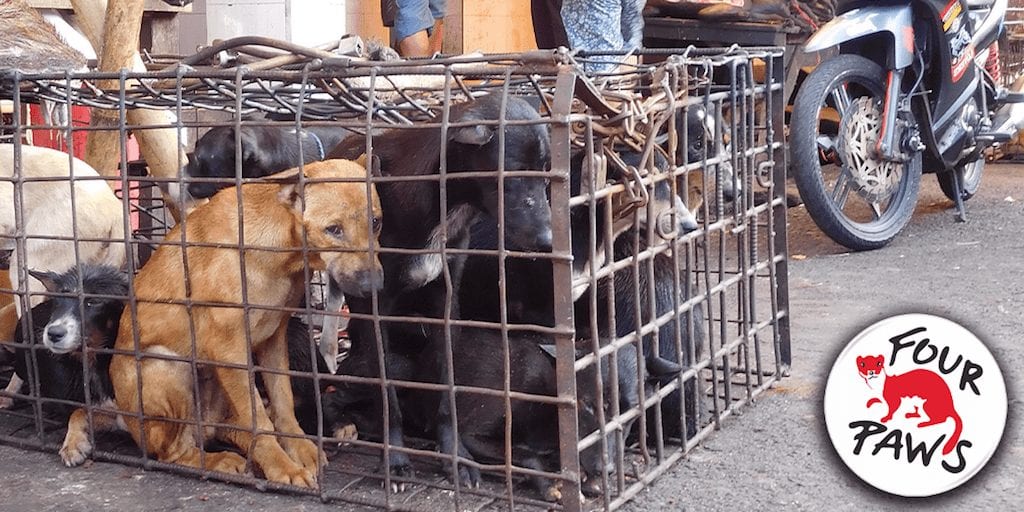 A Cambodia dog meat trader has revealed he suffers from severe trauma from having to slaughter six animals each day.

Khieu Chan works in the dog meat industry to cater for high demand in the country, but he bursts into tears when killing the animals.

The slaughterhouse worker keeps dogs captive in small cages, and said he suffers from guilt after taking their lives.

The Mail Online reports that Chan, 41, begs the dogs to ‘forgive me, If I don’t kill you, I can’t feed my family’ before slaughtering them.

Another worker said he has to kill between ten and twelve animals every day to earn enough money to feed his family, but he feels pity for the animals and guilt for his actions.

Animal charity Four Paws is at the forefront of fighting against the dog meat trade across Asia.

Research by the group revealed workers earn less than £3 per kilo of the meat.

But the industry can give workers far better wages than many jobs in a struggling economy. Suppliers can earn £590 to £780 each month, far exceeding a typical clothes factory worker wages of just £160.

The lack of regulations in the dog meat and pet industry across south east Asia also promotes the spread of rabies, meaning more animals need to be put down.

Four Paws estimates between two and three million dogs are killed in Cambodia alone every year.

Though public opinion has begun to shift against the industry, particularly among young people, there are still more than 100 dog meat restaurants in the country’s capital Phnom Penh alone.

Investigations have revealed shocking treatment of dogs in the meat trade. In an unregulated industry, animals are hung, strangled, beaten to death, drowned or clubbed in the head.

“The dog meat trade in Cambodia is as brutal as elsewhere in Asia”, the Humane Society International said in a statement.

“Many dogs are stolen pets or sickly strays grabbed from the streets, and just as we see in Indonesia and China, the dog meat trade is inextricably linked to the spread of diseases including rabies.

“It’s a public health and animal welfare nightmare that governments across Asia urgently need to tackle.

“Often mistaken for dog farms, many dog slaughterhouses have enormous capacity to hold huge numbers of dogs waiting for their fate.”

What can be done to close down the dog meat trade? Share your thoughts in the comments section below!