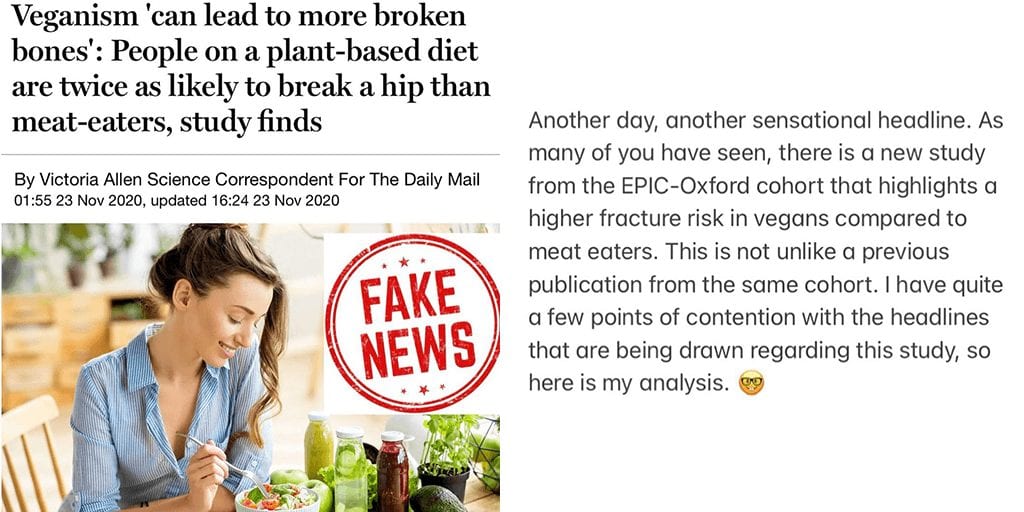 The doctor dismissed the findings of the new Oxford study and highlighted several oversights of the publication.

Plant-based expert, ND Dr Matthew Nagra, debunked some of the findings from the EPIC-Oxford Cohort study that claimed vegans are 43% more likely to suffer any type of broken bone than meat-eaters.

The study was published in the journal, BMC Medicine, yesterday, and has garnered significant media attention.

However, dismissing it as yet another ‘sensational headline’, the plant-based doc put forth his contentions and highlighted some oversights of the publications which render the results of the study inconclusive.

The Canadian naturopathic doctor took to Instagram to highlight that when the researchers adjusted for calcium and protein intake along with other confounding factors in the 55000 + participant group, the magnitude of bone risk in vegans was significantly reduced similar to other participants.

He said: “This means that those factors played a role, but didn’t account for the total increased risk.”

Highlighting the study’s next oversight, the plant-based doc said, the vegan group was found consuming an average of 591 mg of calcium per day. This amounts to less than half a block of extra firm tofu while every other group was consuming over 1000 mg/day.

Dr Nagra said the disparity in the intake levels would obviously impact the results since the vegan group was consuming calcium levels lower than the UK recommendations of 700mg/day.

In a previous study, when the publication looked at vegans consuming 525mg of calcium per day, the increased risk was completely abolished.

“Adjusting for calcium levels, when intake levels are so different between groups, [the levels] are unlikely to be sufficient,” Dr Nagra said.

“Whereas using a firm cut-off, as in the previous paper, may be of more utility.”

The doctor also pointed out that in the study group, only about half of the vegans supplemented at all.

According to Dr Nagra, every vegan should be taking B12 and vitamin D living in the Northern latitudes.

He argued that since the new study did not assess or adjust for vitamin D intake in the participants and with only 50% of the vegans supplementing, it is guaranteed that a huge proportion of them were deficient.

Risk not inherent to plant-based diets

“Typically, when we account for these variables, vegans are not at a higher risk of fractures,” Dr Nagra concluded.

“A failure to include sufficient calcium and vitamin D sources in your diet and/or supplement protocol can result in higher fracture risk, but that is not inherent to plant-based diets.”