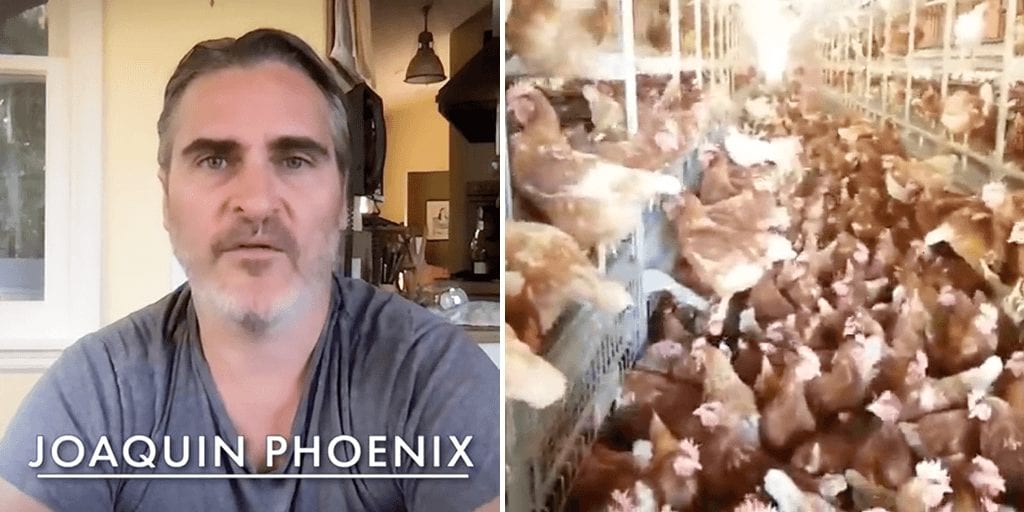 ‘There’s so much pain in the world that we are powerless over, but being party to animal suffering is not one of them’.

Joaquin Phoenix has spoken against the factory farming industry stating it ‘maligns our values’ and ‘exploits our trust’.

The multiple award-winning actor and passionate vegan made the comments as part of PETA’s new ‘Change the World From Your Kitchen’ vegan campaign.

The new ad shot for the campaign shows glimpses of PETA’s investigation that exposes cruelty to birds at a major U.S. egg farm supplying Walmart.

Speaking to viewers from his own kitchen, Phoenix stressed: “There’s so much pain in the world that we are powerless over, but being party to animal suffering is not one of them.”

PETA’s undercover footage in a typical American egg farm in Licking County, Ohio shows widespread abuse of laying hens, such as severe crowding and workers who pull on and twist hens’ heads to break their necks.

The birds have no place to stand, sit, or lie down except on the wire flooring of their cages, which digs into their feet. According to the animal charity, each hen has ‘less living space than a sheet of paper.’

The investigation reveals that most hens in such factory farms spend every day and every night crammed into row after row of cages, barely able to move, trapped 24/7. Due to the constant fear, and deplorable conditions, many hens resort to stress-induced self-mutilation or fighting.

In the video, the actor stated that giant food corporations use deceptive  and unregulated labeling to fool consumers into thinking  they are making  kinder choices, however animals are in a living hell.

Encouraging people to adopt veganism for its many benefits and as means to reject animal cruelty, Phoenix added: “It’s easy to escape personal responsibility by actively avoiding the truth.

But I hope you will join me in rejecting animal cruelty… [and] explore the many benefits of being vegan.”

You can get more information about the investigation here.

Share this story to expose the brutalities of the factory farming industry.