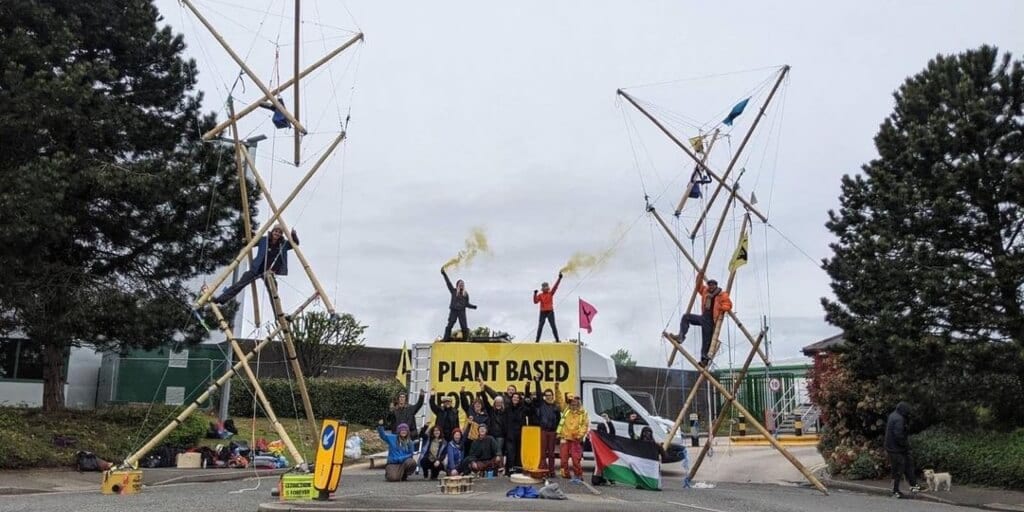 “McDonald’s is just a symbol of a much bigger problem, the entire animal agriculture industry.”

McDonald’s is facing increased pressure to go 100 % plant-based as demonstrators shut down four distribution sites supplying around 1,300 UK restaurants of the global fast-food giant over the weekend.

According to the organization- which is an offshoot of Extinction Rebellion – the protest began at 4.30 am on 22 May. Up to 100 Animal Rebellion demonstrators blocked the entrances using trucks and shackling themselves to bamboo structures.

While police broke up the demonstrations at Hemel Hempstead and Basingstoke overnight, the demonstration in Heywood, Greater Manchester, ended on Sunday at 4 am after 24 hours and the group in Coventry left at 10 am this morning.

The group posted on Instagram that they blocked the sites for a total of 96 hours.

“That’s 96 hours where no McDonald’s truck left to deliver their destruction around the country. Direct action gets the goods yet again!” the group wrote on its Instagram page.

‘Meat and dairy industry is destroying our planet’

According to Animal Rebellion, the protest was aimed at calling out the animal agriculture industry for their part in the global climate crisis.

“McDonald’s is just a symbol of a much bigger problem, the entire animal agriculture industry,” Animal Rebellion said in a statement.

James Ozden, a spokesman for the group said: “The meat and dairy industry is destroying our planet: causing huge amounts of rainforest deforestation, emitting immense quantities of greenhouse gases and killing billions of animals each year.

Nick More, a member of Amazon Rebellion, added: “McDonald’s and the wider animal agriculture industry is clearly responsible for huge levels of deforestation in the Amazon Basin and wider Pantanal region.

“Despite their apparent greenwashing, there is no transparency in their supply chain or independent audit sufficient to support their claims that they are not a driver of deforestation.”

The protest was met with a mixed response. Some social media users expressed support and commended the activists for their dedication to the cause.

Another added: “I admire your bravery! the future is vegan!”

Many users also criticized the move as ‘absolute disgusting behaviour’.

“You guys are the stupidest people alive. First you should focus on protesting something much more serious that’s going on. Two you shouldn’t be forcing your beliefs, eating habits etc onto others,” wrote one user.

Another commented: “Absolute disgusting behaviour stopping people from working and being able to put food on the table. Not the way to protest at all.”