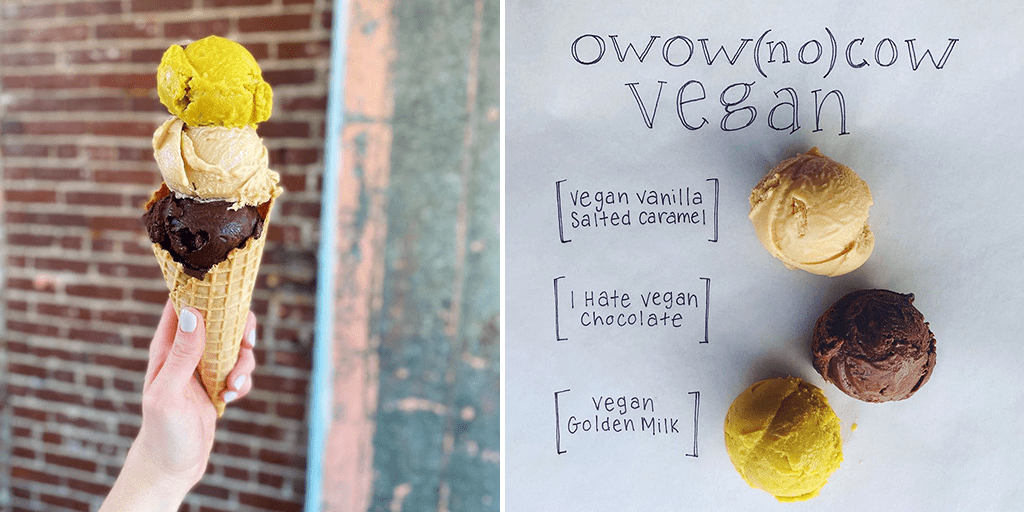 Owowcow, a Lehigh Valley Pennsylvania chain, is out with three flavors of vegan ice cream that contain no dairy, eggs or honey.

Did ya know all our cones are vegan too?? That means you can enjoy a triple (no)cow scoop in any vessel of your choice this weekend and forever beyond ? #owownocow #vegan #veganicecream

In a bid to cater to the growing demand for dairy-free ice cream the artisan creamery spent 6 months and tested 25 batches before it was able to perfect an 11-ingredient recipe that matched the company’s bespoke decadent textures and flavors.

Finalising a base of cashew, oat and coconut cream, the company debuted the flavours at a store in Easton.

Customers were thrilled to hear about the new “OWOW(NO)COW Vegan Ice Cream By Hand”,  on social media.

“Aaaaand you have a new customer!!! Thrilled to hear this!! Looking forward to stopping in with my (vegan) family!!,” wrote one icecream lover.

“You just made my milk and egg allergic kid incredibly happy @owowcow!!! Thank you! ♥️,” added another.

✨?OWOW(NO)COW Vegan Ice Cream By Hand is HERE ?✨⁣ ⁣ We set out to create the purest, best tasting vegan ice cream that’s made from scratch and by hand – just like everything else we do. We spent the better part of the year, countless taste-testing sessions, and 25 reformulations to get it just right.⁣ ⁣ We landed on an 11-ingredient plant based recipe full of the creamiest oat milk, cashew milk, and coconut cream. Check out our launch flavors below and stay tuned for more vegan creations to come.⁣ ⁣ ?Vegan Vanilla Salted Caramel: A delicate vanilla & handcrafted vegan salted caramel ice cream⁣ ?I Hate Vegan Chocolate: Everything that makes our I Hate Chocolate so decadent and wonderful, Vegan style. A rich dark chocolate ice cream with swirls of vegan fudge.⁣ ?Vegan Golden Milk: A warming turmeric elixir turned vegan ice cream. Organic & local turmeric and ginger from Barefoot Botanicals.⁣ ⁣ Owow(no)cow vegan ice cream is available in all shops now – we can’t wait for you to taste it! #owownocow

The brand wrote: “Vegan milkshakes! We make them. ? Turn any of our Owow(no)cow vegan flavs into a creamy dreamy milkshake using deeelicious (two-ingredient!) cashew milk from @elmhurst1925.”

Vegan milkshakes! We make them. ? Turn any of our Owow(no)cow vegan flavs into a creamy dreamy milkshake using deeelicious (two-ingredient!) cashew milk from @elmhurst1925. Available at all shops now! #owownocow

“Love this!!! And thank you for choosing a cashew milk without a bunch of junk in it! ❤️,” read one comment.

“OMG, this changes EVERYTHING!!! While ice cream doesn’t bother me, milk DOES! And I miss grabbing a milkshake on a nice day. So excited to grab one of these ? ??,” wrote another excited customer.

Share this news to let others know of these succulent, decadent and new vegan ice cream flavors.