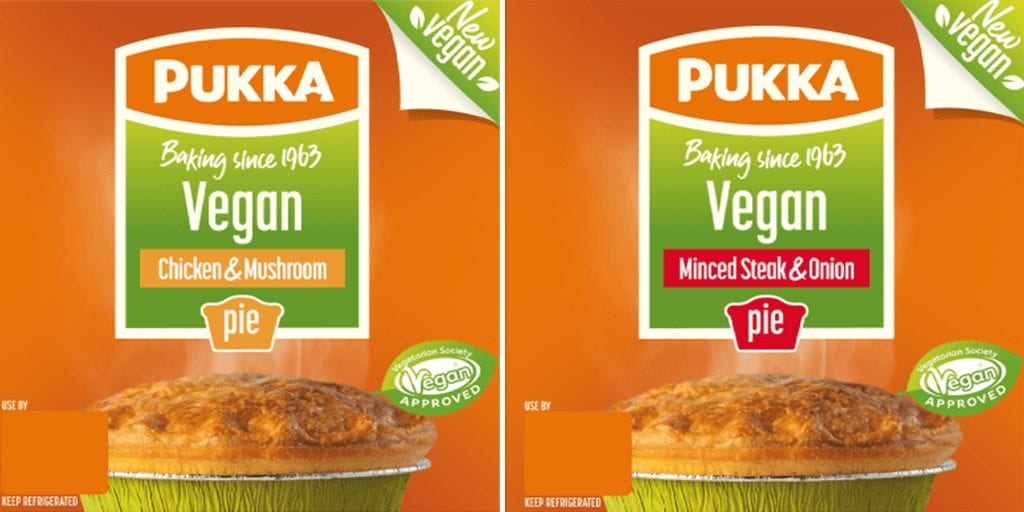 ‘The popularity of vegan food and drink products shows no signs of slowing down, and this is thanks to brands like Pukka launching tasty vegan options’

The new pies – Vegan Chicken & Mushroom and Vegan Minced Steak & Onion have been made replacing the meat with soy protein.

For the Vegan Minced Steak & Onion pie, the minced soy protein vegan ‘steak’ has been paired with finely chopped onions and a rich gravy.

The animal-free versions bear the Vegetarian Society approved vegan trademark and will be sold in Pukka’s new recyclable packaging after it ditched plastic windows from its pie boxes in a bid to become more sustainable.

The two pies priced £1.89 are set to launch in Morrisons from 16 September and Sainsbury’s from 23 September.

‘A Pukka for everyone’

“Our new recipes are part of an ongoing investment to help put more pies on more plates more often and as the People’s Pie, we want to make sure there’s a Pukka for everyone,” Pukka head of marketing Rachel Cranston said.

She noted: “Research has found that 55% of shoppers are actively reducing their meat intake, while the number of vegans in the UK has risen +305% in the last year.

“This demonstrates there’s a real opportunity to offer shoppers vegan alternatives to two of our most popular pie recipes which don’t compromise on taste, and we’re confident that retailers will benefit from incremental sales by stocking our new range.”

“The popularity of vegan food and drink products shows no signs of slowing down, and this is thanks to brands like Pukka launching tasty vegan options,” said Vanessa Brown from the Vegetarian Society.

“It helps to give people more variety and these pies have been accredited with the Vegetarian Society Approved vegan trademark which will appeal to a lot of shoppers looking for their next vegan-friendly meal.”

Share this story to let others know about the new vegan pies from Pukka.