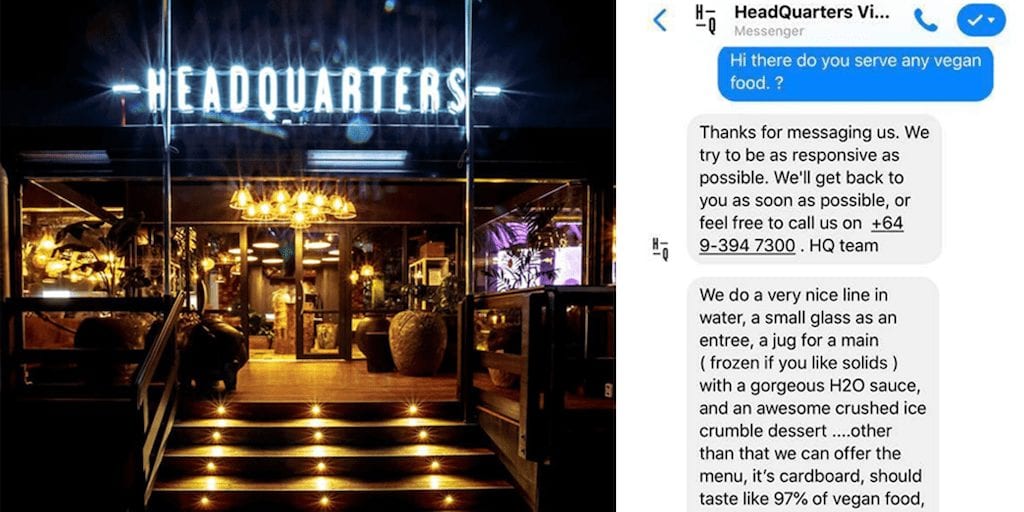 A vegan was left dumbfounded when a restaurant offered her cardboard, water and pet food for dinner.

A hopeful customer messaged HeadQuarters Viaduct in Auckland on Facebook, inquiring about vegan options on the menu.

Instead of receiving a courteous reply to her query, she was subjected to a volley of sarcastic abuse from the HeadQuarters page.

She shared the transcript of the conversation with Newshub.

“We do a very nice lime in water, a small glass as an entree, a jug for a main (frozen if you like solids) with a gorgeous H2O sauce.

“Other than that we can offer the menu, it’s cardboard, should taste like 97 per cent of vegan food, you could eat that maybe.

“We’ll cut in three if you’d like three courses.”

To further mock her, the respondent added: “Or we have two pet rabbits, pie and stew, you could have some of their nuts and lettuce. Let us know (BTW it’s all carbon neutral food).”

The messages finally ended with the following comment: “Can someone lock up the f****** chimpanzee, he’s on Facebook again pretending he works here.”

Speaking to Newshub, he explained: “We’re not set up to cater to vegans…but if one came, we’d cater to them. We cater to everyone, young and old.”

But customers have been left outraged by the poor customer service.

Speaking to Herald, the victim said: “I was so shocked. I was pretty disgusted that someone would say that.”

Her experience with the bar has left many other customers fuming and they took to Facebook to express their anger.

“What a s**tty business. We definitely won’t ever go here,” one said.

Another wrote: “Stuff like this makes me so angry, and stops me from going places like that, so while they may think they are ‘hilarious’ they aren’t just impacting vegans, they are also losing business from people who are not vegan as well.”

Have you ever faced backlash for asking for vegan options? Share your stories in the comments section below!