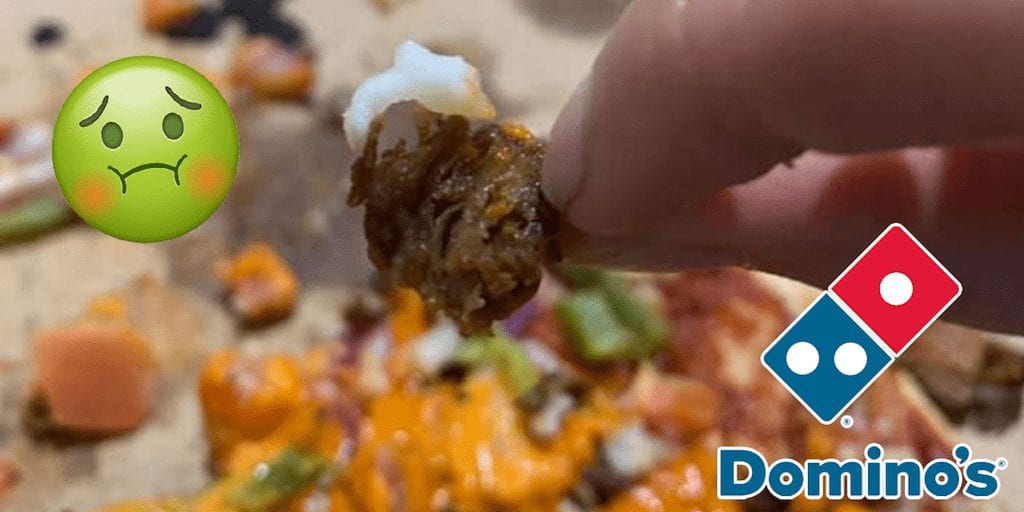 A vegan customer was reduced to tears after realizing that Domino’s had messed up her pizza order when she unsuspectedly bit into real chunks of meat.

A woman in Australia ordered a vegan Taco Fiesta pizza from Domino’s in Cameron Park in Lake Macquarie.

But when she got her delivery, she was dismayed to find that the pizza contained both real meat and dairy cheese.

She alerted the branch which then delivered her a new pizza along with a free garlic bread and drink.

But she was in for a nasty surprise when she bit into what she assumed vegan beef turned out to be cow meat.

She recounted her horror on a vegan Facebook group: “I noticed it wasn’t only vegan cheese and beef, but it also had four huge chunks of real beef too.

“Here I am bawling my eyes out; I haven’t eaten meat for over five years now.”

She immediately called the store again to complain about the order and a delivery agent was sent for damage control.

“She came to my house and gave me a refund which is fine but that’s literally all they could do. Absolutely nothing else. All they can do is trust their employees to put the right toppings on, no extra training or anything.

“How am I meant to be ok right now? I’m still crying at the thought I’ve eaten real meat,” she wrote in her social post.

Her post evoked sympathy from several users, one said: “I’m so sorry this happened to you, It’s f***ing unacceptable.”

“This is gross and unacceptable,” added another

Others on the group suggested the blunder was a genuine mistake.

“It was probably a mistake. I work in fast food and I’ve made heaps of genuine mistakes,” a person wrote.

Speaking to Yahoo News Australia, a Domino’s spokesperson claimed these instances were few and far between and advertently occurred because of human errors during peak hours.

“As one of the largest sellers of vegan food in Australia, we pride ourselves on providing our customers with more choice. Each of our team members works hard to deliver meals that meet our customers’ requirements, including individual dietary needs,” it said in a statement.

“We have specific procedures in place for customers with vegan and allergen requirements, including using fresh gloves and cutting blades for their order.

“Because of these procedures, we have received positive feedback from customers on our vegan range. But in a busy store environment we know that mistakes, though uncommon, can happen. Where this is the case, our local store will refund or remake the order as soon as possible.

“Domino’s has a 100 per cent customer satisfaction guarantee, and if any customer is not satisfied with their Domino’s meal, they can contact us 24 hours a day, 7 days a week via our social media channels.”

Have you ever been served meat instead of a vegan option? Share your experiences in the comments section below!