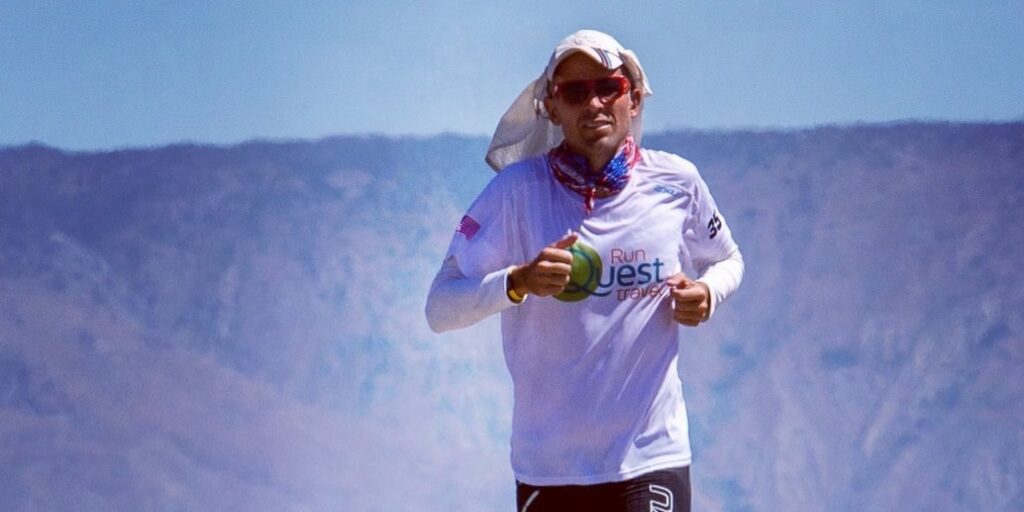 Vegan athlete Harvey Lewis has just won the Badwater 135 Ultramarathon – the most demanding and extreme running race offered anywhere on the planet.

He won the event for the second time. He’d previously won in 2014, and this was his 10th finish and fifth podium.

‘The world’s toughest footrace’ covers 135 miles (217km) non-stop from Death Valley to Mt. Whitney, CA. It starts at 280 feet below sea level and finishes at an elevation of 8,300 feet at the Mount Whitney portal

Runners in the race represented 17 countries and 29 states. They included  24 women and 60 men, with entrants ranging in age from 28 to 76.

The Cincinnati native and endurance runner was the first to cross the finish line completing the gruelling race in 25 hours and 50 minutes and 100°F heat.

Lewis went vegan in 2016 after being vegetarian since 1996. He attributes plant-based nourishment for his endurance and athletic performance.

“It’s the single most important ingredient to my longevity in the sport,” the 45-year-old told VegNews.

“My health, energy, and performance as a runner [has] changed dramatically.”

In an interview with Cincinnati People, he said that his vegetarian lifestyle for the past 20 years has been a “substantial part” of his running success and body’s resiliency.

According to him, being vegetarian provided him the ‘necessary ingredients for my body to bounce back quickly from punishing endurance events over one hundreds of miles’.

“I drink no milk. I live… entirely (on) plant-based products… I can run a 24-hour race hitting over 158 miles and then run to school the very next day,” he said.

His plant-based regime is undoubtedly living up to his expectation. In a post on Instagram, after the win, Lewis recounted that at a point during the race his body went through a rough segment and while he has almost never suffered stomach issues, he couldn’t digest anything and the only thing that kept him going was almond milk and an extremely light breakfast.

Lewis isn’t the only vegan runner to prevail in extreme and challenging races.

He broke the world record for the number of loops run around New York City’s Central Park.

In 2018,  fellow runner Catra Corbett set a new record on the  310-mile John Muir Trail. The 53-year-old vegan athlete completed the course in seven days, nine hours, and 49 minutes – the fastest known time for the race.