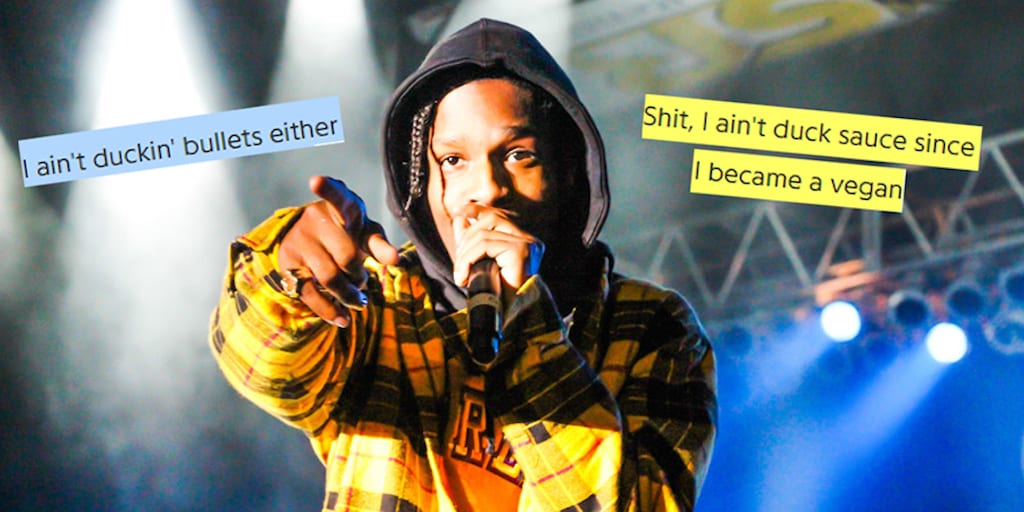 Rapper A$AP Rocky has revealed he’s switched to a vegan diet in his new single.

The new song titled “Babushka Boi” reveals to his fans in the second verse that he’s ditched animal products.

Rocky raps: “I ain’t ducking bullets either. I ain’t duck sauce since I became a vegan.”

Rocky has been a pescetarian since 2012 and moved to vegetarianism soon after when he discovered the truth of the chicken industry.

“I became a pescetarian a few months back. I started doing research and found out how they treat those animals before they, you know, service them. They inject them with steroids and drugs that enhance their growth. None of that s**t is healthy, and on top of that those f*****g animals were stressed and compressed the whole time. That kind of food going into your body is unhealthy. I don’t mean to sound like some weirdo, but it is what it is.”

A video posted by the Vegan Hip Hop Movement in 2015 shows the rapper speaking about how he managed to change his habits on tour to suit his diet.

“How is it possible to be a vegetarian when you’re on the road?” Rocky is asked.

“On of my managers is a vegetarian. He’s a vegan actually,” he explains.

“He gives me, like, protein substitutes and everything, all that other stuff, vitamins. I’m straight.”

In a June 2018 article, Rocky also expressed his disapproval with the poultry industry:

You gotta go do research on the way they treat like f*****’ chickens, man. Those chickens go through f*****g torture before they’re processed and s**t, have all sorts of f*****g steroids injected in them and everything.”

What influence can Rocky’s transition have on veganism? Share your thoughts in the comments below!