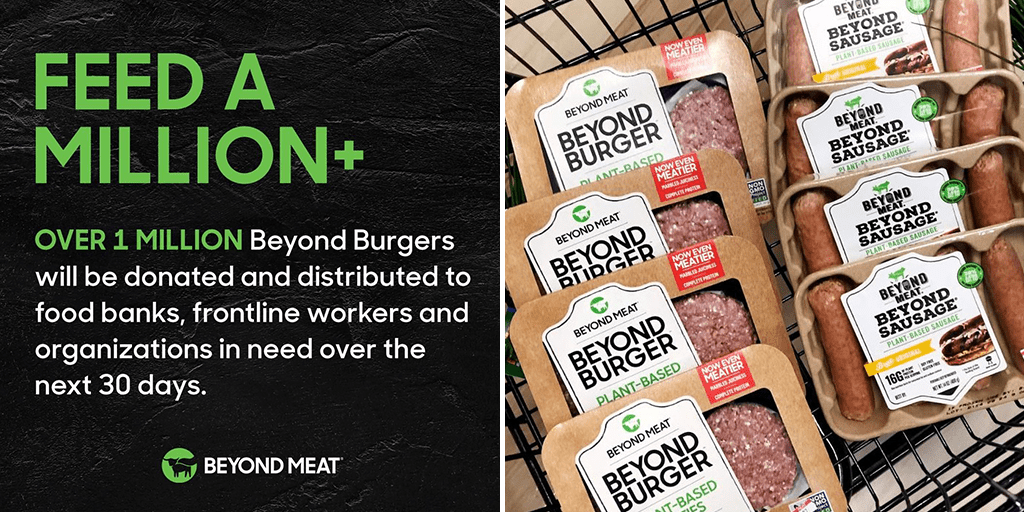 ‘We at Beyond Meat feel a deep responsibility to give back by providing access to good, nourishing meals at no cost.’

For the next 30 days, the Los Angeles-based vegan brand will be distributing more than a million Beyond Burgers to those most affected and in need as part of its Feed A Million+ campaign.

“We are dedicated to making sure those who need it most right now have access to a good, nourishing meal at no cost,” announced the brand on social media.

With the help of employees, ambassadors and friends, the plant-based startup is rallying to give back via multiple channels, which include food banks, frontline workers and organizations in need.

“Our goal has always been to use food as a vehicle for change, and we’re fortunate to be in a position to put that into action now like never before,” the brand added.

Ambassadors such as NBA star Kyrie Irving and comedian Kevin Hart have also come on board to contribute towards the campaign.

The comedian shared a video on Instagram, in which he said: “I want to give a shout-out to my partners in crime over there at Beyond Meat. You guys are unbelievable, feeding over a million people right now through these crazy times is a must. I love the fact that you’ve stepped up and I want to do my part as your partner, I want to step-up as well.”

Calling all frontline medics “real heroes”, he expressed his gratitude for the amount of work the doctors and nurses were doing during the pandemic and said he wanted to make sure they had proper meals.

In the caption for the video, he wrote: “Today, I’m sending Beyond Burgers over to Northridge Hospital Medical Center with the help of @doordash & @hashtaglunchbag. @beyondmeat.”

As part of the Feed a million campaign, Beyond Meat also called on fans to nominate causes that matter to them, so that Beyond Meat could donate burgers to those causes through operational outposts set-up in previously closed restaurants in Los Angeles and New York, an effort that would help recreate jobs.

“Our LA outposts are made possible by @hashtaglunchbag and @findyourhilltop and our NY outposts are operated by @rethinkfood.nyc. In both cities, @doordash will deliver the donated meals free of charge,” wrote the brand on Instagram.

Share this news to inspire, motivate and support others.