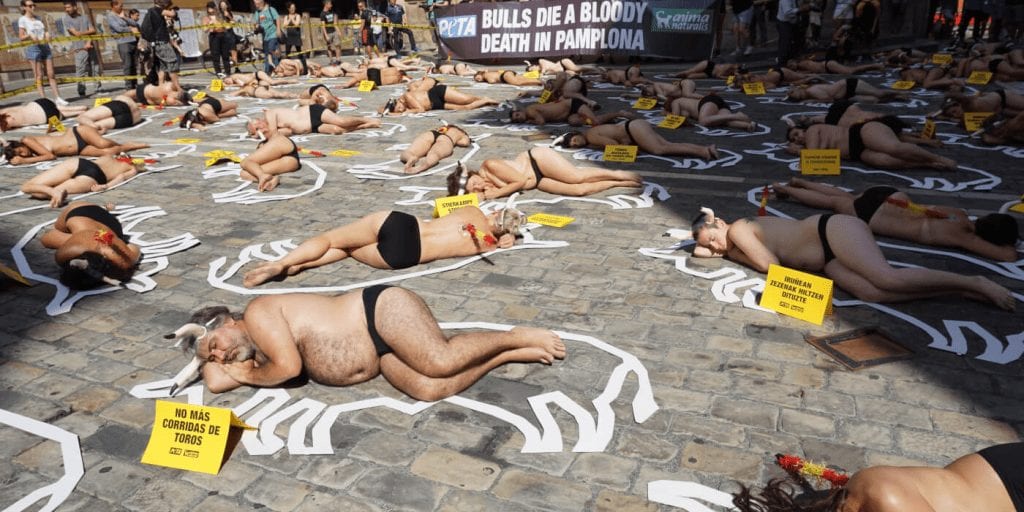 As over a million tourists gear up for the cruel and torturous Running of the Bulls festival in Spain this weekend, animal rights group PETA held a striking protest on the city streets.

Armed with signs proclaiming “Bulls Killed In Pamplona” and “Stop Bullfighting”, dozens of supporters of PETA and Spanish animal-protection group AnimaNaturalis staged a “crime scene” cordoned off with yellow tape at the Plaza Consistorial in Pamplona, Spain.

The activists – who had travelled from around the world – lay nearly naked inside outlines of bulls to remind onlookers that bulls are made of flesh, blood, and bones and feel fear and pain, just as we do.

The protest comes ahead of the city’s notorious Running of the Bulls spectacle, in which terrified bulls are chased down the streets to the bullring, where they’re tortured to death.

“It’s 2019, and no living being should be slowly stabbed to death for the sick satisfaction of a rowdy mob,” says PETA Director Elisa Allen. “PETA and the rest of the world are absolutely disgusted that Pamplona continues to smear its own name with this out-of-touch, blood-soaked display straight out of the Dark Ages.”

More than 125 Spanish towns and cities have declared themselves anti-bullfighting. But in Pamplona, terrified bulls are forced to run along narrow streets on their way to a violent death in the bullring, often slipping and sliding along the way.

Once there, men taunt, exhaust, and stab each bull with a lance and several harpoon-like banderillas until he becomes weakened from blood loss, PETA explained.

Then, the matador stabs the exhausted animal with a sword, and if the bull doesn’t die straight away, other weapons are used to cut his spinal cord.

Many bulls are paralysed but still conscious as their ears or tails are cut off to be given to the matador as trophies.

What do you think of the Running of the Bulls festival? Share your thoughts in the comments below!