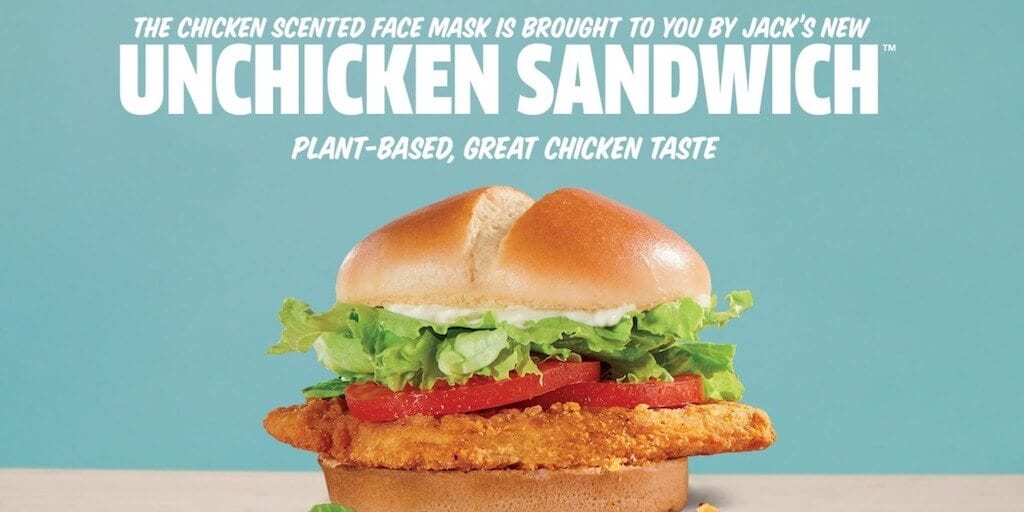 Image: Jack in the Box

“We are excited to meet the growing demand for meatless alternatives with our new Unchicken sandwiches providing indulgent taste, crispy crunch, and savory flavor in a new plant-based option.”

This month, fast food chain Jack in the Box has been testing its first ever limited-edition plant-based chicken items at select locations in the US, in order to gauge customer response.

The pair of new ‘Unchicken’ sandwiches are available at locations in Reno, Nevada, Monterey and Salinas, California.

The San Diego-based company has partnered with alternative protein brand Raised & Rooted, which is owned by Tyson Foods, to make the chicken-like patties.

The pea protein-based patties are available in two varieties: original and spicy. They  are breaded to “deliver mouthwatering taste with a savory crunch and texture sure to rival the competition”.

The sandwich features a split-top bun, lettuce, tomato and dairy-based mayo, which can be excluded to make the order vegan.

The sandwiches are selling for $6.99 and will be available until Dec. 12, or as long as supplies last.

“Jack in the Box is delivering industry leading innovation with the first plant-based chicken sandwich at retail in the US,” said Jennifer Kennedy, chief product officer at Jack in the Box.

“We are excited to meet the growing demand for meatless alternatives with our new Unchicken sandwiches providing indulgent taste, crispy crunch, and savory flavor in a new plant-based option.”

David Ervin, vice president of marketing for the Raised & Rooted brand, added: “We believe this is the best tasting plant-based product in the market today.

“We are excited to be partnering with Jack in the Box to bring the delicious taste people have come to love from our plant-based nuggets and tenders, to even more people with the Unchicken sandwiches.”

Jack in the box is also hosting a giveaway of free chicken-scented face masks on Friday 23rd October to celebrate the success of the launch.

Jack in the Box is the second major restaurant chain to have experimented with a chicken alternative.

KFC was the first quick service restaurant to test a plant-based chicken product from Beyond Meat last year. The results of its Beyond Fried Chicken test drive were so phenomenal that KFC introduced the product in a number of other locations, including the UK, China, Hong Kong, Vietnam, and Canada.

Since then, several popular fast-food joints have launched their own plant-based chicken offerings.

Made using pea protein, Nando’s newest product called the Great Imitator is served as four strips grilled to order with the restaurant’s signature vegan Perinaise and can be ordered as part of burgers, pittas and wraps.

According to the food account’s insider report, McDonald’s new vegan burger will feature a patty from Beyond Meat served in a sesame bun with tomato, lettuce, pickles, onions, vegan mayo, ketchup, mustard, and a ‘slice of vegan cheese’.

However, there has been no official announcement from McDonald’s yet.

Share this story to let others know about Jack in the Box’s new ‘Unchicken’ sandwiches.