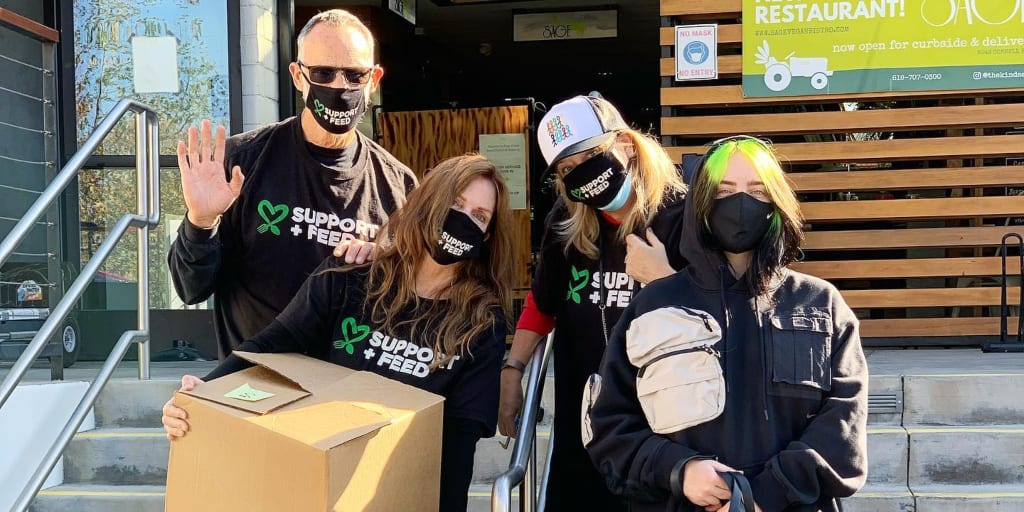 “At a time when most people were worried about their own health and security, Maggie dreamed up and implemented a plan to get nourishing food to people who needed it most.”

The food drive, which took place at  My Friend’s Place – a non-profit that offers comprehensive services to youth experiencing homelessness – was to mark the one-year anniversary of Maggie Baird’s Support + Feed initiative.

Within a year the initiative, which also scooped the PETA’s “2020 Company of the Year” award, has expanded its reach to New York, Washington D.C, and Philadelphia.

Baird took to Instagram to state: “What we imagined as a few months worth of effort became a year of full-time volunteering for so many and now, as we have seen the impact that receiving this nourishing, delicious food has had for people and also knowing that every plant-based meal we serve has a positive impact on climate change, we are more committed than ever!”

She thanked Rooney Mara and Joaquin Phoenix as well as expressed her gratitude to Monty’s Good Burger for “being a wonderful partner” in distributing the plant-based burgers.

Mara and Phoenix in a statement to Variety said: “At a time when most people were worried about their own health and security, Maggie dreamed up and implemented a plan to get nourishing food to people who needed it most.”

Phoenix, who has been a vegan since age three regularly uses his platform to speak against animal cruelty.

Last year at the Academy Awards, he used his Oscar acceptance speech to call out animal agriculture and slam the dairy industry.

Meanwhile, Eilish, a vegan since 2014, has also been a vocal advocate of the vegan movement by raising awareness of the ethical, health, and environmental advantages of veganism.