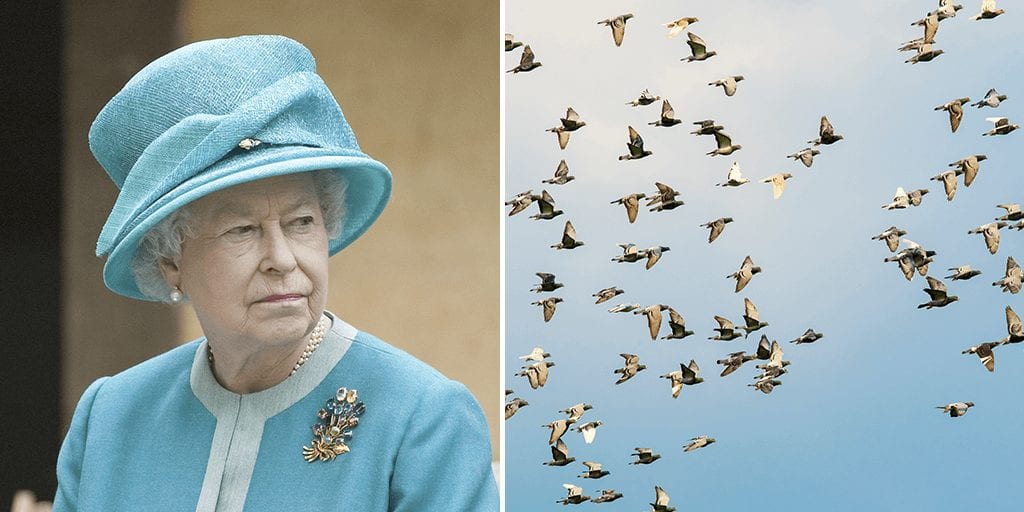 ‘This race takes place in one of the hottest months of the year. One can only imagine the suffering these birds endure.’

The Queen has been urged to ditch the South African Million Dollar Pigeon Race (SAMDPR) – the Olympics of pigeon racing, after all the 8 participating pigeons flown in a crate  from the royal loft in Sandringham died during quarantine.

According to reports, in the race held this year in February 2020, more than 1,000 birds died in quarantine in South Africa from a virus. Only 800 of the remaining 4,000 entered from 36 countries made it.

Arno De Klerk manager of South Africa’s National Council of Societies for the Prevention of Cruelty to Animals said: “During the 2020 season, 80% of pigeons disappeared.

“This race takes place in one of the hottest months of the year. One can only imagine the suffering these birds endure.”

According to animal rights group PETA, the race is inherently cruel with the birds being forced to race over 370 miles in 33-degree heat.

In their  investigation, PETA revealed that only 44 out of 373 pigeons sent for the racing event from the UK survived this year. The group added that only five of the 42 pigeons the Queen sent to South Africa in the last six years survived.

According to the group, most of the birds forced to fly in these contests disappear forever, dying from disease, exhaustion, attacks by predators, dehydration, or starvation. The one who return become “prisoners”, forced to mate – often with their own offspring or siblings – and never released. On average, just 22% of the birds entered into the SAMDPR survive.

In addition, birds from all over the world are grouped together in the same loft during thor training period increasing their stress and the risk to transmit diseases, including zoonotic ones, to one another.

PETA has launched a petition to urge the queen to “end her involvement in this cruel “sport”, withdraw her patronage from all pigeon-racing organisations and convert her Sandringham loft from a pigeon-breeding mill into a sanctuary for lost, injured, and unwanted pigeons.

“Exploiting the extraordinary homing abilities of pigeons in this cruel manner so as to win a prize purse is extraordinarily callous,” PETA Director Elisa Allen said.

“PETA most respectfully urges the Queen to remove the royal loft birds from these deadly races and turn her Sandringham pigeon breeding mill into a sanctuary.”

Event organisers however denied the animal cruelty accusations.  Race director Michael Holt said: “The pigeons have no jockey on their back to force them to fly. They do this of their own free will and love of the loft.”

While the Royal Household told the Daily Star: “Sandringham Estate has operated a pigeon loft for almost 150 years and adheres to all standards and regulations required.”

Share this story to spread awareness about the cruelty meted out to birds for entertainment and sport.