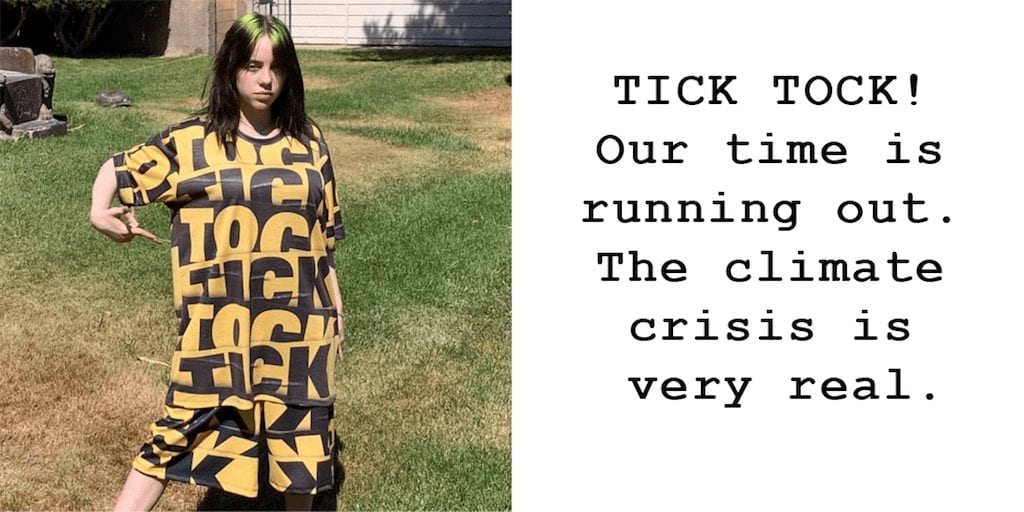 Billie Eilish has urged her fans to demand action from world leaders over climate change in a video posted on her Instagram page.

The 17-year-old pop star and vegan campaigner posted a video captioned ‘Tick Tock’ urging her fans to ‘speak up’ against the looming crisis.

“TICK TOCK! our time is running out. the climate crisis is very real. we need to speak up and demand that our leaders take action. #climatestrike #fridaysforfuture @greenpeace @gretathunberg,” she wrote in a post which has since been removed.

Eilish revealed she follows a vegan lifestyle earlier this year, and urged her fans to wake up to the realities of the meat industry and go vegan.

The global climate change strike attracted millions of people around the world who took to the streets to demand action against global warming on Friday, September 20.

Swedish activist Greta Thunberg has spearheaded the movement. Since 2018 she has skipped school every Friday to protest against the apathy on climate crisis and demand government action.

Addressing more than 100,000 demonstrators in Manhattan, Thunberg said: “We are united by the science and we will do everything in our power to stop this crisis from getting worse, even if that means skipping school or work because this is more important.

“Why should we study for a future that is being taken away from us? That is being stolen for profit.”

How much influence will the global strikes have? Share your thoughts in the comments section below!